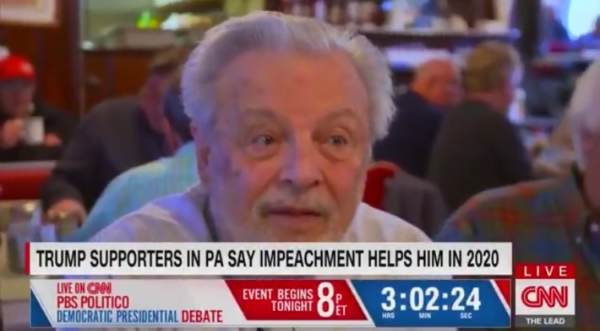 The Democrats have likely assured a Trump victory in many states with this faux impeachment and Pennsylvania is no exception.

Trump narrowly won Pennsylvania in 2016 and is looking for a landslide win in 2020.

Voters in Pennsylvania, one of the ‘Rust Belt’ states that President Trump flipped from blue to red and won, are sick and tired of the impeachment hoax.

“I think what they’re doing is completely wrong and I will vote for him in the coming election,” one Trump supporter in Blair County said.

Impeachment put a “nail in their coffin” another supporter said of the Democrats.

“If it did anything, it would make me want to support him more.”

It’s not just Trump voters in Pennsylvania who are sick of the Democrats and their impeachment hoax.

Last month CNN interviewed Dems in deep blue Pennsylvania who said they want nothing to do with impeachment.

Democrats voted to impeach President Trump for ‘abuse of power’ and ‘obstruction of Congress’ on Wednesday night.

The vote was partisan — NOT ONE Republican voted in favor of impeachment.

228 Democrats voted to impeach.
192 Republicans voted against the sham.

And now Pelosi is refusing to send the articles over to the Senate.

Pelosi and the Democrats will pay for their lawlessness in 2020.

CNN has broadcast some actual truth lately, leading me to believe that they are desperate to find something people will actually watch.

But, this is still CNN and for every one of those rare truthful moments we get a multitude of lies and lunacy.

We believe you Don.

CNN is so out of touch that not even the liberals would want to associate with you either.