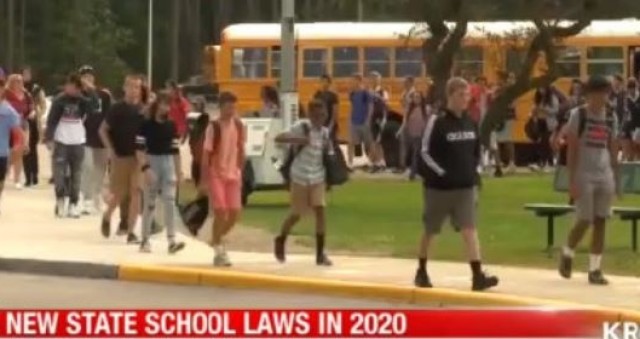 Gee, what could possibly go wrong with this?

(TNS) The Democrats who rule California remind us of juvenile delinquents who managed to grow up and find themselves in charge of things, enacting laws based not on common sense or the public good but instead on the whims of childlike fantasies.

The latest absurdity is aimed at disrupting every single public school in the state, as highlighted in a tweet from Andrew Pollack, whose daughter, Meadow, was murdered at Parkland High in Florida by a crazed teen lunatic the system failed to identify and stop.

“These are the same liberal democrat policies that led to my daughter getting murdered.

Parents it’s your responsibility where your kids go to school.

Time for home school or private. Don’t roll the dice with your child’s safety!”

These are the same liberal democrat policies that led to my daughter getting murdered.

Parents it’s your responsibility where your kids go to school.

Time for home school or private. Don’t roll the dice with your child’s safety! https://t.co/T14KiEdqnM

That’s right: Soon, no school in California will be able to suspend some students for disobeying a teacher.

Mind you, the Left-wing policies of the Obama Department of Education failed to hold Parkland shooter Nicolas Cruz accountable, as did the principle of the school.

Starting next school year, it will be illegal for public schools in the state to suspend students in first through fifth grade for willfully defying teachers or administrators.

Then, from 2021 through 2025, it will be temporarily extended to kids in grades six through eight.

Supporters say suspensions for willful defiance are disproportionately used against students of color.

So, if the youngest students aren’t taught to behave in class, who believes they are going to grow up to be disciplined students in junior high and high school (other than the lunatics who passed this law)?

Worse, the new mandates are actually certain to cause disruption and willful defiance. KRON also notes:

Limiting and banning smartphone use is at the center of another law affecting schools in 2020.

School boards will have the power to ban devices with the exception of emergencies or other special situations, such as medical reasons.

Supporters say smart phone use is linked to lower student performance and interferes with the educational mission of schools.

Okay, so what happens when a ‘student of color’ gets his or her smartphone taken away?

Again, while these new laws are 100 percent California, the trend away from holding students (and their parents) responsible for poor behavior in class has its origins in the Obama administration (surprise!). And for the same alleged reason…racism!

As is typical with so many other policies, federal meddling in what should be a local matter leads to poor results.

This is the conclusion reached Monday by a Heritage Foundation panel about a school discipline initiative, launched by the Obama administration, that suddenly became the subject of national debate after the Feb. 14 massacre at a high school in Parkland, Florida.

A “Dear Colleague” letter from the Department of Education in 2014—designed to crack down on racial disparities in school discipline and reduce the “school to prison pipeline”—created negative unintended consequences, according to Manhattan Institute scholar Max Eden, who was on the panel.

Sen. Marco Rubio, R-Fla., recently suggested in a memo to Education Secretary Betsy DeVos that the guidance to schools led to “systematic failures” to report the Parkland shooter to legal authorities.

Teachers Feel Like They Have Lost Control (say it isn’t so!)

Arrests and Suspensions Went Down, So Did Academic Standards (because disruptive students disrupt the education process…duh)

California, completely ruled by the Garbage Party, is a basket case in terms of the negative impact of public policies regarding homelessness, pot use, taxes, overregulation…and now public schools.

If you live there, get out while you can.