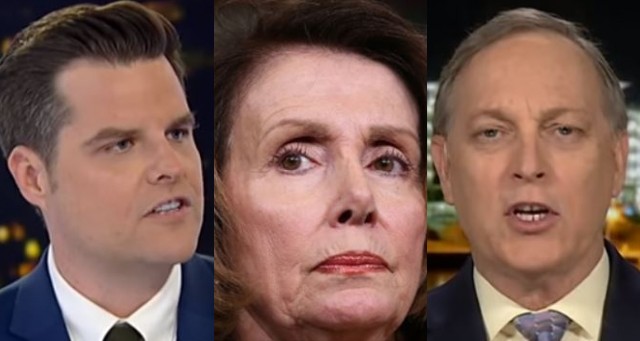 Pelosi would rather hold power than anything else…

(TNS) You’ve likely read reports here and there citing Washington insiders who have said they never believed that House Speaker Nancy Pelosi (D-Calif.), wanted to impeach President Donald Trump because she knew it was a political loser for her Garbage Party.

And yet, she allowed the president to be impeached anyway, against her better judgment and political instincts. Why?

Because Pelosi wanted to be in charge more than she wanted to shy away from impeaching a popular, successful president.

What they detailed helps explain the raw pursuit of power that turns Americans off of politics, against the system, and towards Donald Trump.

As to the impeachment, Jarrett asked his guests, “Have [Democrats] created a political quicksand and now they’ve stepped right into it?”

“Pelosi’s instincts were correct about a year ago, and the Venezuelan side of the Democratic Party in Congress said ‘No, we’ve got to have it,’” Biggs said, pointing straight at the far-Left Marxist faction of Democrats led by Alexandria Ocasio-Cortez and her “squad.”

“She had to cut a deal to become Speaker because it was such a close race,” Biggs continued (power alert!) “She has taken the bull by the horns and it looks like she’s about to get gored because of it. The reality is this has been a huge mistake by the Democrats.”

Jarrett then asked them if some Democrats were angry about what Pelosi and her chief loser lieutenant, Adam Schiff, have done both to them and to their party.

“I think some of them are. Some of them I’ve talked to quietly on the side want this to go away. They wish it had never happened. But Nancy Pelosi’s got them, because she raises money for them,” he added.

Then Gaetz stepped in to provide more details and context to what played out on the floor of the people’s House.

“Andy and I observed active threats on the House floor that if the Blue Dog Democrats did not go along with the radical left of the Democratic Party and support impeachment, that they would not be supported by the DCCC. (Democratic Congressional Campaign Committee),” he continued.

“The only quid pro quo that I observed in this impeachment process is the quid pro quo where if the Democrats did not line up behind Nancy Pelosi as lemmings ready to go off the cliff, that they would then be bludgeoned by their own party in the primaries.”

Jarrett opined that the reason why Pelosi was holding onto the articles of impeachment was to use them as a political weapon to bludgeon President Trump with.

“But if it’s not working for her and it’s having the opposite effect, doesn’t she want to walk that over, run it over to the U.S. Senate and get it over with?” he asked.

I don’t always agree with Mitch McConnell, but I think he made a valid point. You don’t gain much leverage in threatening to withhold something that the Senate does not want. And as Andy pointed out, you’ve got a lot of these members from districts that were won by Donald Trump who will vote for impeachment but who want it through the legislative digestive system as fast as possible.

If you’re one of the 2020 Democrats running for President, this has now become all-consuming.

The election would be a referendum on impeachment and right now, it would be an election that the President would overwhelmingly win in the electoral college.

So there you have it: Documented, witnessed proof that Pelosi, from a safe but filthy, diseased, feces-laden district in San Francisco is willing to sacrifice whomever she needs to in order to maintain control, to be in charge, to have power.

Including members of her own party.

The impeachment of President Trump was a sham and she knows it. What’s more, Pelosi knows that most Americans know it, too, as Trump’s rising approval rating proves.

But consider this was also a Left-wing coup of sorts — out with the Old Guard and in with the New Democratic Socialists. The transition of the Garbage Party is complete.