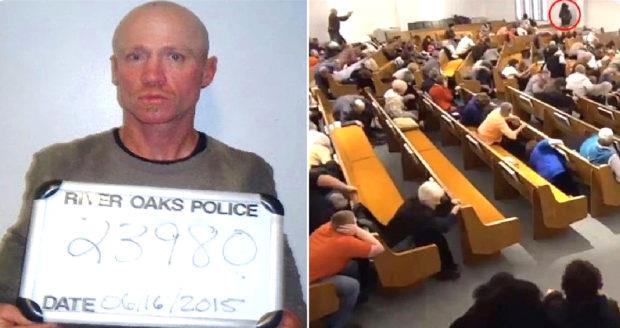 Keith Kinnunen may have been the classic liberal biting the hand that fed him, indicated by his activity prior to the church shooting.

It is being reported that he was a frequent visitor of West Freeway Church as well as a financial beneficiary of the Church’s charitable giving.

He may have become enraged over the times the church gave him food instead of money.

More details have been revealed.

As reported by Fox News, shooter Keith Thomas Kinnunen had attended the West Freeway Church of Christ many times in the past.

But something was odd: Amid those occasions, Keith was given food. His response: Anger, over not being given money.

The 43-year-old — who entered the sanctuary in a wig, fake beard, and long black coat — killed congregants Richard White and Anton “Tony” Wallace with a shotgun.

The church’s senior pastor, Britt Farmer, confirmed to The Christian Chronicle that he recognized Keith upon seeing a police photo of him undisguised.

According to Britt, Keith wanted cash, not help:

“We’ve helped him on several occasions with food. He gets mad when we won’t give him cash. He’s been here on multiple occasions.”

When you cut some people off from their cash, they tend to panic.

Who could forget the Food Stamps fiasco from several years back?

Basically there was a problem with the benefits being issued and the government and stores worked together to ease the pain.

In the end people abused the generosity.

The Texas shooter sounds like a man who did not know how to take care of himself and may have become angry that he was given food instead of cash.

Personal opinion: I’ve helped people before and, from experience, some people do get mad when you offer food instead of the money they supposedly need for food.

When I say addict, it could have been anything… gambling, sex, alcohol, drugs, etc.

People that ask for money for food, and get mad when you only give them food certainly have some problem that isn’t 100% clear.

Maybe he was mad because they gave him generic brands.

Shame on that Church for trying to give a man food when he claimed to be hungry.