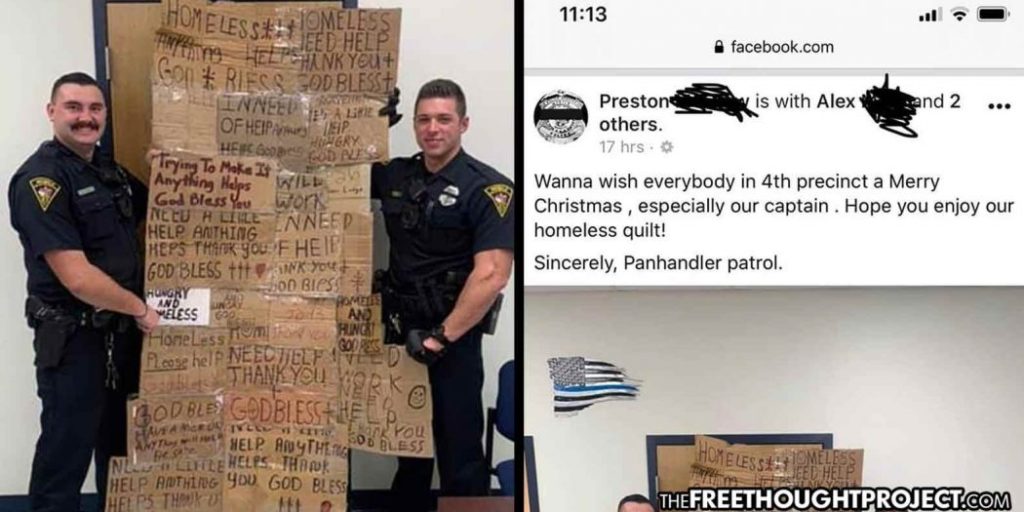 Mobile, AL — Two Mobile panhandling prevention police officers made international headlines and drew criticism for their perceived insensitivity this Christmas. They fashioned what they called a “quilt” out of many of the panhandling signs they confiscated from the homeless.

According to WKRG the controversy began last week when:

A Mobile Police officer posted the picture to Facebook, in the post that accompanied the picture, the officer wrote in part, “Hope you enjoy our homeless quilt!”

Officers with the 4th precinct took the panhandling signs and either glued or sewed them together and, while standing beside the so-called “quilt” had their picture taken. Yet what started out as a cruel joke, mushroomed into international outrage; now it has ended with Mobile Chief of Police issuing an apology. Even though panhandling is illegal in Mobile, Chief Lawrence Battiste said:

I take full responsibility for making sure we have an aggressive stance on dealing with panhandlers because it impacts the safety of our community. Homelessness, we do not intend to police our way out of homelessness.

Intimating the embarrassment the police department has received on social media and in the press, Battiste issued what can be characterized as a sincere apology:

Once again, I’d like to apologize for the insensitive behavior of the officers, their actions are nowhere indicative of who we are as a department.

As a police department entrusted with serving and protecting our community, we offer our sincerest apology for the insensitive gesture of a Facebook post by two of our officers where they are holding up a homeless “quilt” made of panhandling signs.

The apology was followed up by an acknowledgement the officers in question and the department as a whole must enforce laws which have criminalized panhandling in Mobile. That being stated the chief then addressed the tasteless actions with which his officers engaged when they attempted to mock the beggars. The statement continues:

Although we do not condone panhandling and must enforce the city ordinances that limit panhandling, it is never our intent or desire as a police department to make light of those who find themselves in a homeless state.

Chief Battiste then stated his agency partners with community resources to help the homeless and those in need, although he did not elaborate in his apology. He stated:

Rather, our position has always been to partner with community service providers to help us help those faced with homelessness with hope to improve their quality of life.

The Mobile Chief of Police also provided facts and figures related to his department’s efforts to rid Mobile streets of panhandlers. At the time of the incident in 2019 to date, 63 arrests were effected against panhandlers. These numbers are in stark contrast to the chief’s statement on not “policing their way out of homelessness.” In fact, that is exactly what they appear to be doing.

Many police accountability activists would claim such arrests only further victimize the homeless and those in need by arresting them for being too poor to eat or pay their living expenses. By placing the homeless in jail, many will spend extremely long periods behind bars before being tried and found guilty in a court of law.

This is due to the fact that, often times, the homeless are too poor to be able to post bond to be able to get out of jail, often spending weeks, months, or longer, all the while awaiting trial for doing nothing other than begging for money or food. Undoubtedly, police departments who arrest the homeless and those begging for sustenance are complicit in a system which preys upon the poor.

As screen grabs of the now-removed post began to share on social media, the internet took to calling out these cops for what they were representing.

“Thank you for saving me from that scary stinky guy asking for a buck. How many woman were raped how many people were murdered how many kids got heroin or meth. Why not make are streets safe truly safe. This is not how I want my tax dollars spent,” on Facebook user wrote.

“Great work…find people with the least and terrorize them during the holidays…..,” another person said.

And last, but not least, a word of wisdom: “Food for thought. My cousin was a cop where we live and thanks to bad luck he is now homeless. These guys should be thankful for what they have and not being so disrespectful to other humans. Karma will make its rounds. Homelessness is an issue everywhere. I took in 4 different family members that were homeless and helped them get back on their feet. I do what I can for all those I come in contact with and without judgement because it is the right thing to do. God bless those that truly care about people because no one knows when they could end up in the same position.”

Jack Burns is an educator, journalist, investigative reporter, and advocate of natural medicine. This article was sourced from The Free Thought Project.