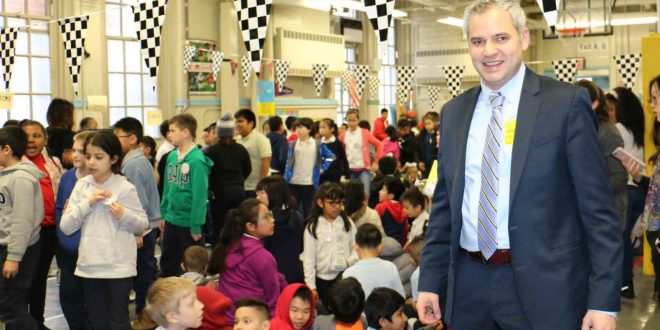 Milwaukee, WI — A high-ranking education official in New York’s Department of Education was arrested on Sunday in Milwaukee after he was busted trying to have sex with a child. Deputy Chief of Staff David A. Hay was taken into custody while he was trying to fly out of Milwaukee following an undercover investigation by multiple law enforcement agencies.

Officer Stuart Zuehls, a spokesman for the Neenah, Wis., police department told reporters that Hay is accused of using a computer to facilitate a child sex crime. Adding suspicion to the nature of Hay’s employment with the Department of Education is the fact that this man — who would be making decisions for and working around children — was never given a proper background check to work in education, according to the NY Times.

After Hay was arrested on Sunday, the DOE immediately announced his termination and released a statement.

“These allegations are incredibly disturbing and absolutely unacceptable,” Miranda Barbot, a spokeswoman for the department, said in a statement. “We took immediate action removing Mr. Hay from payroll and are terminating him. We referred this to the Special Commissioner of Investigation and we will fully comply with any investigation.”

While his top-level job inside the DOE did not consist of interacting with children on a daily basis, prior to rising through the ranks, Hay was a principle and left that job under less than pristine conditions.

Hay took a leave of absence from his job as a high school principal in the Kettle Moraine School District in suburban Milwaukee in late 2010, and left that job in early 2011, citing differences with the district’s superintendent, according to the Milwaukee Journal Sentinel.

“It is not clear whether a completed background investigation would have revealed information relevant to the current charge against Mr. Hay,” said Margaret Garnett, the Department of Investigation commissioner.

The idea that a child predator could infiltrate such high-level ranks within the Department of Education due to a lack of a background check is shocking. However, the problem of failing to do background checks for education officials is reportedly widespread.

According to a report in the NY Times,

Ms. Garnett said she inherited a massive backlog of 6,000 unfinished background checks when she took control of the department in January, some dating as far back as 2015. “The risks presented by this example are exactly why I took immediate steps to assess and then reorganize the Background Investigation Unit,” she said, referring to Mr. Hay.

The scope of the problem is still unclear, though the unfinished background checks apply to high-ranking officials and policymakers across Mayor Bill de Blasio’s administration. Ms. Garnett said she had taken immediate action to begin to address the issue.

Hay now goes on a long list of other high-level government officials who have been caught allegedly exploiting children. As TFTP previously reported, multiple victims came forward and accused Seattle Mayor Ed Murray of sexually abusing them when they were children in Washington’s foster care system.

In September, Pennsylvania Senator Mike Folmer was arrested after images of child pornography were found on his phone when police searched his home after obtaining a warrant. He was an outspoken advocate of child abuse reform.

Earlier this year, Arizona representative, David Stringer unexpectedly resigned from his elected position as a representative. After he resigned, records were released showing that he was arrested in the 80s for raping two children—one of whom had a developmental disability. After a subsequent investigation was launched, we learned about the former representative’s sick history including a recording in which he condones child sex trafficking.

The fact of the matter is that child sex abuse in this country takes place on a massive scale and many within the system are some of the worst abusers. Those who speak out against it and attempt to expose the system, are often times killed or silenced.