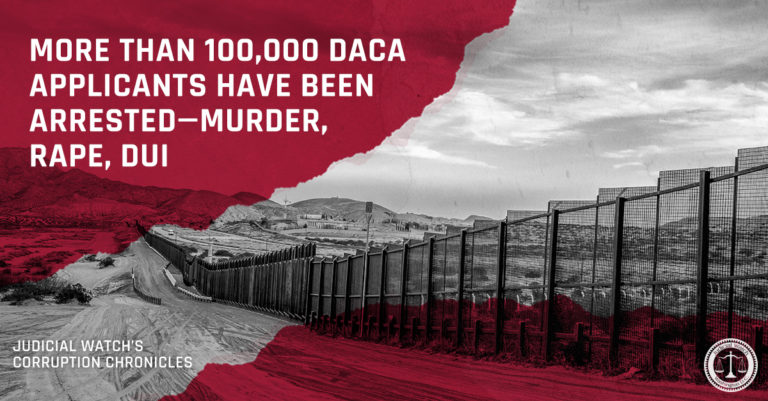 More than 100,000 illegal immigrants who requested a special Obama-era amnesty for adults who came to the U.S. as children have criminal histories, according to an alarming report released this month by the government. Offenses committed by the illegal aliens seeking protection, benefits and rights under the policy known as Deferred Action for Childhood Arrivals (DACA) include murder, rape, weapon and assault charges. DACA has shielded nearly 800,000 illegal aliens under the age of 31 from deportation and allowed them to obtain work permits and drivers licenses. Obama launched the outrageous measure through executive order in 2012 to help children who came to the U.S. “through no fault of their own.” The Trump administration tried to end DACA in 2017 but open borders groups sued to keep it going and now the Supreme Court is set to decide the matter.

Regardless of how the high court may rule, the fact remains that a big chunk of DACA applicants have arrest records, according to the figures released by U.S. Citizenship and Immigration Services (USCIS), the Homeland Security agency that administers the nation’s lawful immigration system. The stats show that nearly 110,000 DACA requestors out of nearly 889,000 had arrest records, accounting for 12% of applicants. “Offenses in these arrest records include assault, battery, rape, murder and driving under the influence,” USCIS writes in a statement announcing the report. Here’s another disturbing fact; of approved DACA requestors with an arrest, a whopping 85% (67,861) were arrested right before the U.S. granted them amnesty. Nearly 25,000 DACA recipients with arrests had multiple arrests and 218 had more than 10 arrests. Incredibly, around one-fourth of the illegal immigrants with more than 10 arrests were approved by the government as of last month. In all, the government reveals that it has approved 79,398 DACA requestors with arrest records. Not all the delinquents are approved, the figures show. More than 100,000 with criminal arrests were denied or terminated.

Most of the arrested DACA approvals involve driving infractions and immigration related civil and criminal offenses, but thousands were granted amnesty after committing serious crimes. Nearly 8,000 illegal immigrants granted protection under DACA committed theft or larceny, the records show, and nearly 7,000 drug-related offenses. More than 4,000 were apprehended for driving under the influence, 3,421 for battery and 3,308 for assault. Thousands of others rewarded with DACA committed vandalism, burglary, offenses against children and weapons crimes. Hundreds of others were approved for DACA despite arrests for sexual abuse and rape, kidnapping or trafficking, hit and run, embezzlement and a variety of other serious offenses. Fifteen illegal aliens with murder charges got DACA as well as 15 street gang members and two arrested for child pornography. Most of the DACA candidates were arrested between the age of 19 and 22 though tens of thousands were also arrested between 23 and 26, well into adulthood. Mexicans account for the overwhelming majority of DACA recipients arrested (91,272) followed by El Salvador (4,998), Honduras (4,597) and Guatemala (4,304).

“This agency is obligated to continue accepting DACA requests from illegal aliens as a direct result of the previous administration’s decision to circumvent the laws as passed by Congress,” according to USCIS Acting Director Ken Cuccinelli. “We hope this data provides a better sense of the reality of those granted the privilege of a temporary deferral of removal action and work authorization under DACA.” USCIS figures released last year show that the biggest concentration of illegal aliens protected by DACA are in California (197,900) and Texas (113,000), though states such as Illinois (35,600), New York (32,900), Florida (27,000) and Arizona (25,500) also have significant numbers.

Reprinted with Permission from Judicial Watch