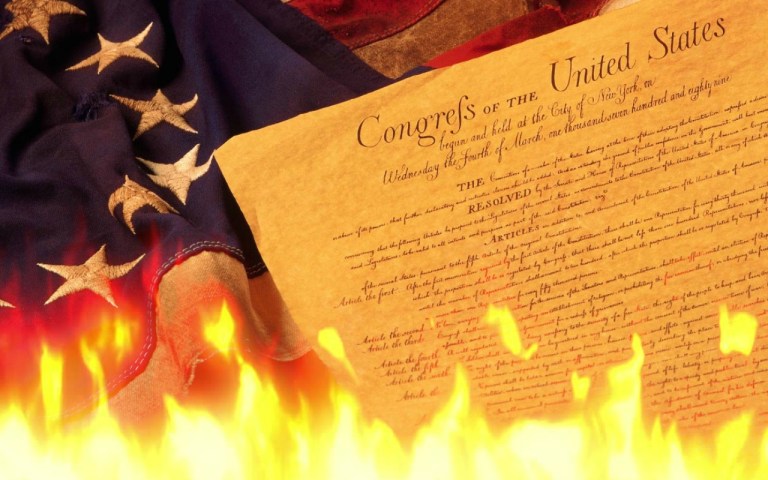 (TNS) We have been reporting on the increasingly volatile situation in Virginia regarding numerous gun control proposals incoming Democrats have been floating since they won control of all lawmaking institutions in November.

While it’s not clear yet what specific proposals are going to be offered, one thing is certain: Virginia Democrats are making it clear that any effort to oppose any new laws won’t be tolerated.

Specifically, “Second Amendment sanctuaries” — now covering nearly 80 percent of the state — won’t be honored, and anyone who attempts to defy their Left-wing masters in Richmond will face legal consequences.

Last month, a reserve Marine Corps officer and cop addressed Democrat arrogance on the issue of guns and even claimed that it could lead to a second civil war because their “mindset” is exactly the same as it was in the 1860s.

At a Dec. 3 meeting of the Fairfax County Board of Supervisors, U.S. Marine Corps Reservist Maj. Ben Joseph Woods addressed the board and admonished Commonwealth of Virginia lawmakers for their plans to pass sweeping gun laws after they gain the majority next week …

As Maj. Woods addressed the meeting, he spoke of his time in the military and federal law enforcement and what he feared politicians were doing to the state:

“I’m not going to address the bills themselves. What I would like to address is the fact that at this point, so many people believe that these are unconstitutional or draconian that as of last night, 30 counties in this state which have voted themselves…to be Second Amendment sanctuary counties.

And I am frightened to the point that I am looking at moving my wife and child…out of this state if these bills pass. The reason is because my fellow law enforcement officers…Tell me that they would not enforce these bills regardless of whether they believe in them ideologically because they believe that there are so many people angry in gun shops, gun shows, at bars, we have heard it now, people talking about tar and feathering politicians in a less than joking manner…

That is a terrifying prospect and I have never seen people willing to speak about something like that publicly…As a law enforcement officer, I empathize with concerns people have over gun violence.”

When asked to sum up, Maj. Woods concluded with this warning:

“The legal precedent we would set by allowing the legislature to selectively ignore enumerated rights at will is the same mindset that 150 years ago let this country into a civil war.”

It’s not clear if he believes that Democrats in the South were responsible for the Civil War via secession over the institution of slavery or if he’s implying something else. But to hear a veteran military officer and cop say something like this is chilling.

Incoming majority Democrats have been floating one new gun control bill after another — a “red flag” law that destroys the Fifth Amendment’s “due process” clause; bans on entire classes of semi-automatic rifles; magazine bans; even a gun confiscation measure.

Democrats have claimed that they have been given a “mandate” from voters in the state because they happened to have captured a majority of seats in the Assembly and Senate, as well as owning the governor’s mansion.

But if that were true, then how come more than 110 cities and (a majority of) counties around the state have declared themselves to be “Second Amendment sanctuaries,” pledging not to help state authorities enforce any new gun control laws like “sanctuary cities” in the state refuse to help federal officials enforce immigration laws?

It just feels like this issue is going to come down to who blinks first or, if no one does, someone will miscalculate. And our money is on state Democrats who are arrogantly dismissing two-thirds of their state with new gun law proposals.