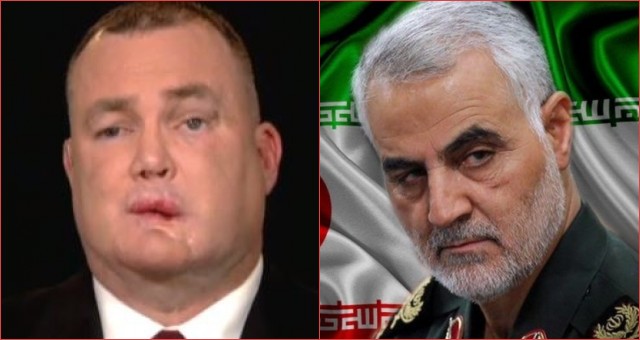 If anyone has a valid opinion about Iran, it’s the men and women who have been fighting that regime…

(TNS) As the Left continues to melt down over President Donald Trump’s decision to take out one of the worst terrorist leaders on the planet, Iranian Quds Force leader Qassem Soleimani, there are many Americans who not only agree with it, but think it’s long overdue.

They would be America’s Iraq war veterans, many of whom were permanently scarred and injured by Iranian-made devices supplied by Soleimani and his forces.

One of them, retired U.S. Army Staff Sgt. Roger Bartlett, who was blinded in one eye by one of those devices while serving in Iraq, reminded Americans — including ungrateful, history-challenged, racist dirtbags like Colin Kaepernick — the price they paid at Soleimani’s hand.

In an interview with Fox News’ Martha McCallum, Bartlett, who has been a frequent voice against the Iran nuclear deal and the fact that Obama’s sanctions relief provided Soleimani cover for his terrorist activities, said of Trump’s decision that it is “retribution.”

“All these guys… died at the hands of the Iranians in this current regime and some to the Quds Force and Soleimani, at his hands,” Bartlett said holding up pictures of his comrades, Fox News reported. “So for us, it’s, it’s retribution.”

“But it’s finally policies that make sense and protecting the United States and its citizens and especially its military who serve in these conflicts,” Bartlett added.

But…but…but…what about Iranian ‘retribution?’ Shouldn’t Americans be quaking in their shoes, fearful of the awesome, deadly, global military reach of the all-powerful Iranian regime?

“I say we need to send a message. They’ve been sending us a message for years that they’re at war with us. We’ve done nothing,” he said.

“So how many times you got to … stick your finger in this light socket before you realize it shocks you?”

He also said he believes there “are plenty of good Iranians” who would benefit from a regime change.

“You just get rid of this regime. It would be wonderful if we can do that,” Bartlett said. “And if we can support those locally who are willing to live in today’s society without terrorism, that’s great.”

President Trump has said that his action this week was not about regime change or seeking a war with Iran, but clearly the former is the administration’s objective. Tough sanctions along with overt support for Iranian dissidents is how you achieve that without putting American boots on the ground.

Clearly, this president isn’t looking to pay off the Iranian regime, that’s for sure.