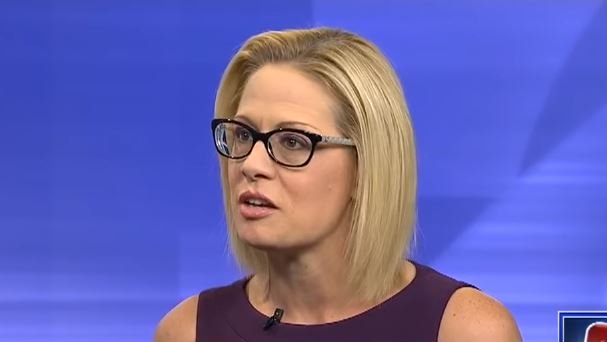 Sometimes Democrats forget about the evil agenda in play and spew a little common sense.

This is one of those times.

Kyrsten Sinema (D-AZ) has challenged the consensus of her party and makes a lot of sense in doing so.

Sen. Kyrsten Sinema seemed to break away from the pack mentality of her fellow Democrats in attacking President Trump over the U.S. airstrike against an Iranian military commander.

Rather than spout the Democrats’ immediate condemnation of the president’s actions as an escalation of conflict with Iran, the Arizona lawmaker believed Iranian “aggression should be checked,”  as she said in a statement released on Friday.

“Iran’s aggression should be checked, and we must protect all Americans at home and abroad,” the moderate Democrat added.

The Pentagon revealed that Soleimani, a longtime enemy of the U.S. who was reportedly responsible for the deaths of hundreds of U.S. personnel, was “developing plans to attack American diplomats and service members in Iraq” and the Middle East region.

No one really wants war with Iran, except for possibly Iran itself, but at what point do you stop turning the other cheek?

This was retaliation and national defense.

President Trump is decisive and will not let atrocities against Americans go unanswered.

Sinema is a minority in her own party at this point and it’s really good to see.

I don’t agree with Senator Sinema often, but her patriotism and concern for her own constituents in Arizona is quite admirable here.

It’s difficult to believe that such words of wisdom came from this woman.

Does she have a hidden motive?

Maybe she will be the next to jump ship to our side.

Either way, Thank You Senator for some much needed truth from your side of the aisle.