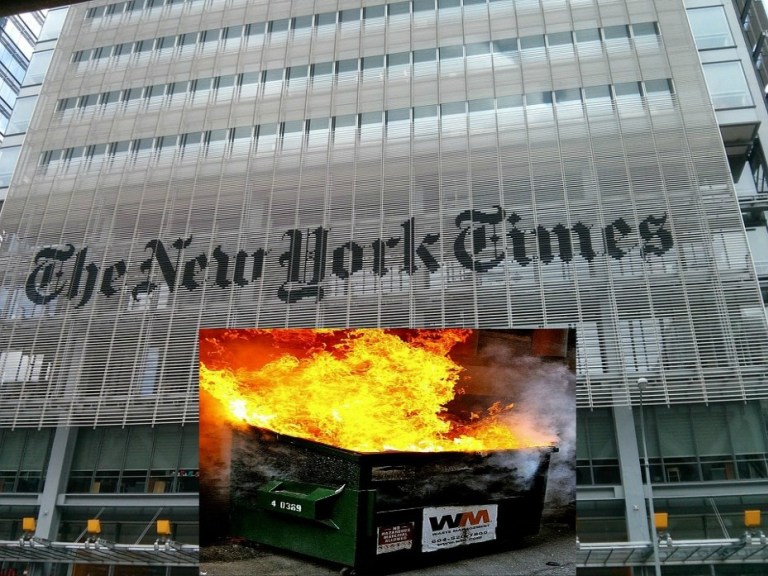 (TNS) The Democrat Party’s propaganda media publishes so much fake news these days it is difficult, if not impossible, to keep track of it all.

That’s because it comes at us from so many different angles. If the paper itself isn’t publishing outright lies (like the “Trump-Russia collusion” hoax), its various correspondents are making things up that the paper did not necessarily report.

The NYTimes’ Kurt Andersen tweeted this Sunday, which, of course, was retweeted tens of thousands of times:

@NYTimes: “Officials presented the president with options. The Pentagon tacked on the choice of targeting Suleimani mainly to make other options seem reasonable. They didn’t think he would take it. When Mr. Trump chose the option, military officials, flabbergasted, were alarmed.”

First of all, while it’s true that the Pentagon provides the president with many options when he is considering military action, they provide appropriate options as they pertain to the president’s policy objective. So if his objective is eliminating a threat, then the options would be appropriate for that objective.

But this “quote”…really isn’t. Andersen gets called out by truth detectors who note that he pulled together several passages of the article to make it seem as though it all came from one segment of the story.

This is a fake quote and this is literally fake news.

This has gone viral and has been shared by the Obama bros, among others, but it's not a real quote from the NYT article. It combines various sentences and presents them as a single quote. Regardless of your opinion on the strike, context matters. Here's an accurate version: 1/ https://t.co/UpdVcvTu1P

(And, FWIW, based on the the NYT authors' track record on the topic, it's fair to view their presentation of the issue with a little skepticism) 2/https://t.co/V4gGAppb2v

And by the way, the only way “military officials” would have gotten “alarmed” or become “flabbergasted” would have been if Trump ordered a nuclear strike on Iran or something similarly outrageous. To suggest that a drone strike operation — which the Pentagon has done thousands of times — would somehow be ‘alarming’ to defense officials is just absurd.

We’re talking about Iran here, not China or Russia.

The "quote" above conflates two different decisions. According to the article, after Iran's militias killed an American, the Pentagon presented Trump with several options. Soleimani was the most extreme. *At that point,* Trump chose the middle option—hitting the militias. 3/

Then—after Iran's militias stormed our embassy—Trump chose the Soleimani option. There wasn't a single briefing and an "oh shit" moment, as the "quote" above implies. 4/

The article does say that officials were alarmed about retaliation—and based on the authors' history referenced above, I'd be curious to hear more context about those statements—but those concerns were not expressed in the context in which @KBAndersen presented them. 5/

“Alarmed” about retaliation? Hardly. More like ‘concerned,’ which is appropriate.

The Pentagon was no doubt anticipating it and had already planned for it — which would have been in the briefing package given to Trump (if he didn’t ask about it outright — he has been president for three years already).

In short, the "quote" that @KBAndersen shared was not an actual quote from the article (which he curiously did not share). And regardless of how you view the strike/the content of that NYT article, there's way more context than his random compilation of sentences implies. /fin

Read this thread by @JamesHasson20 & ask yourself whether the Obama Bros & their media allies enthusiastically quote-tweeting this fake quote are grossly incompetent & didn’t even bother to see if it was accurate or if they just don’t care as long as it advances their narrative. https://t.co/Uy1ZA9tkVa pic.twitter.com/W84TxPGcFX

We are to the point in this country where our ‘mainstream media’ institutions are literally shills and propagandists for one political party — just like media outlets are in China, Cuba, Iran, and every other authoritarian regime on the planet.

As a result, Americans can’t believe a thing they publish about this president. That’s dangerous.