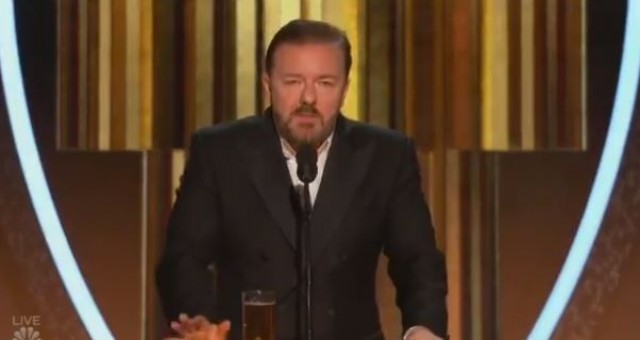 Golden Globes host Ricky Gervais is always controversial, but this year he took it to the next level and torched the stars and their hypocrisy.

From accusing them of “dating” people who are too young, to saying they were friends with Jeffrey Epstein he took it to them.

And then, before any of them could give a political speech, he told them to stuff it because they have no room to preach to anyone.

Look, talking of all you perverts, it was a big year, surviving R. Kelly, leaving never land, two popes. Shut up, shut up I don’t care I don’t care many talented people of color were snubbed in major categories unfortunately there’s nothing we can do about that. The Hollywood foreign press are all very, very racist.

So, we were going to do an in memoriam this year when I saw the list of people that died, it wasn’t diverse enough, no it was mostly white people and I thought, no, not on my watch. Maybe next year. Let’s see what happens.

No one cares about movies anymore, no one goes to cinema, no one watches network TV. Everyone’s watching Netflix. This show should just be me coming out, you win everything Netflix, good night. No, we drag it out three hours you could binge watch “Afterlife” instead of watching this show.

That’s a show about a man who wants to kill himself because his wife dies of cancer and it’ still more fun than this, okay spoiler alert, season two is on the way, so in the end obviously he didn’t kill himself just like Jeffrey Epstein.

Shut up. I know he’s your friend, but I don’t care you have to make your own way here, your own plane, didn’t you? …

… It was it was great long, but amazing. It wasn’t the only epic movie. “Once upon a time in Hollywood,” nearly three hours long.

Leonardo DiCaprio attended the preview and by the end, his date was too old for him. Even Prince Andrews was like, ‘come on, Leo, mate, you’re nearly 50-some.’ …

… Apple roared into the TV game with “The morning show,” A superb drama about the importance of dignity and doing right thing made by a company that runs sweat shops in China

You say you’re woke but the companies you work for, unbelievable Apple, Amazon, Disney. If ISIS started a stream service, you would call your agent, wouldn’t you?

So if you do win an award tonight, don’t use it as a platform to make a political speech, right? You’re in no position to lecture the public about anything.

You know nothing about the real world. Most of you spent less time in school than Greta Thunberg. If you win, come up, accept your little award, thank your agent and your God, and [ muted ].

What else could be said about that? He nailed them to the wall and their gasps showed how uncomfortable they were with having a mirror held to their face.

Fantastic job Gervais. We may not agree on everything but you walked into the lion’s den and kicked the lion’s butt.