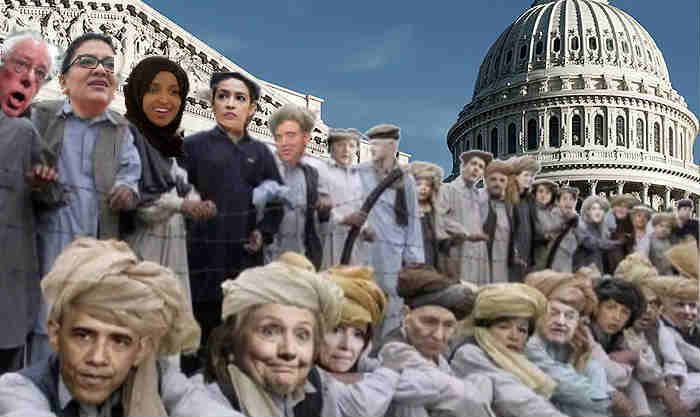 Looks like some of us were bang-on in our predictions that the United Nations would move in to help the Democrats make the drone  killing of terror mastermind Qassem Suleimani the latest President Donald Trump Impeachment cause:

“Her reaction sharply contrasted with that of former UN chief Ban Ki-Moon, who following the U.S. killing of Osama bin Laden in 2011 said that he was “very much relieved by the news that justice has been done to such a mastermind of international terrorism.”

“Callamard’s tweet storm ignored Suleimani’s personal and ongoing role in directing terror attacks throughout the region, including the killing of more than 500,000 men, women and children in Syria, Iraq and Yemen,” said Executive Director, UN Watch, Hillel Neuer, “including many hundreds of protesters this year in Iraq and Iran.”

Courtesy of the the overbearing UN, the Democrats, whose Robert Mueller III Russian stole-the-election hoax and the Nancy Pelosi/Adam Schiff televised Impeachment ‘Inquiry’ ended in failure, have a new coup d’état to remove President Trump from office.

In other words, the Swamp has morphed into a veritable quagmire—just in time for Election 2020.

As Desperado Dems wait for the world’s biggest bureaucracy to do their dirty work, rumors that retaliation for Suleimani’s death will come from “sleeper cells” on American soil, are rife.

Folk seem to think of sleeper cells as the New York state ‘Islamberg’ one written about during the past decade, where jihadis in waiting train on outdoor target practice.

Not all sleeper cells on American soil are rudimentary camp-outs.  Some operate in comfort zones, where target practice comes from media hits, and where junior staffers make coffee runs for elected officials.

You read that correctly.  Congressional reps who  are pro-Iran rather than pro-America operate from unsuspected “sleeper cells”—right in Congress.

Are leakers—including the still unidentified ‘whistle blower’, whose lies kicked off the Pelosi-Schiff-led  Impeachment ‘Inquiry’ tied in to the New York Times reporter who claims that intelligence suggesting Soleimani was planning an imminent attack was “razor thin”?

“It’s ironic that political considerations suddenly now require Trump and the GOP to place their faith in the good judgment of the intelligence community after deriding them as deep-state liars for the past two years. Say what you will about Tucker Carlson, at least he’s consistent in receiving government assurances about the necessity of military action with skepticism.”  (HotAir Jan. 4, 2020)

There you go, Tucker, dragged off to the wrong side by Times reporter Rukmini Callimachi—who specializes in covering ISIS and al Qaeda.

“Rukmini Callimachi is a Times reporter who specializes in covering ISIS and Al Qaeda but her sources are whispering to her about Soleimani this weekend.” (Hot Air)

Shouldn’t American Intelligence gathering authorities like the FBI and CIA be calling on Callimachi to see what other ‘intelligence’ she may have?

In typical Marxist fashion, the Democrats are floating the hoax that the president only targeted ‘poet’ Suleimani because the president needed a quick distraction from Impeachment.

“It’s not at all hard to decouple this from the impeachment saga. I did it at length in this post yesterday, but the nutshell version is that Trump just isn’t facing major political risk from the impeachment process such that he’d need a distraction on the colossal order of liquidating Iran’s terrorist-in-chief. Everyone understands that acquittal by the Senate is assured; impeachment polling has been flat for Democrats at best, with some polls showing opposition to removal rising as the process has played out; it so happens that Trump’s job approval today in the RCP average is tied for the highest level he’s seen since the early days of his presidency — and that number is based on surveys taken before the news about Soleimani broke. Trump simply didn’t need to “wag the dog” here. If anything, he seems to be weirdly looking forward to his Senate trial: It’ll be the biggest television show in America for weeks on end and it’ll be his first real chance to mount a formal public defense. The potential risk to his presidency from killing Soleimani is waaaaaaaay greater than the risk posed by impeachment. The fact that Callimachi doesn’t recognize that makes me wonder if her sources are telling her what she wants to hear.” (Hot Air)

“We took action last night to stop a war. We did not take action to start a war.”

Is it only the Democrats who could continue game playing in the face of world-wide encroaching terrorism?

As the president pointed out in the immediate aftermath of the Suleimani takedown, “We took action last night to stop a war. We did not take action to start a war.”

Meanwhile, if the FBI is really serious about protecting American security, its investigators should find out what else Rukmini Callimachi knows.

As for sleeper cells operating in Congress?

An effective way to make sure there will be no ‘leaks’ from members of Congress ‘sleeper’ cells would be to have Squad members Ilhan Omar and Rashida Tlaib re-sworn into office on the Bible.

Finally, It should go without saying that political games—no matter the cause— should never be tolerated when so many peoples’ lives are at risk.

Reprinted with Permission. Non-Commercial Use.

RSS Feed for Judi McLeod
Judi McLeod is an award-winning journalist with 30 years’ experience in the print media. A former Toronto Sun columnist, she also worked for the Kingston Whig Standard. Her work has appeared on Rush Limbaugh, Newsmax.com, Drudge Report, Foxnews.com.