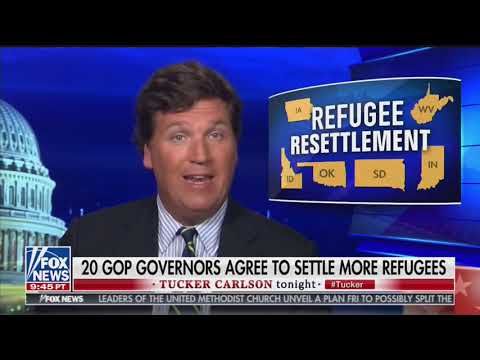 Establishment Republicans lost me years ago.

I still vote Republican because I’m not voting socialist, but come on…

18 REPUBLICAN Governors have indicated that they will take MORE refugees for resettlement, despite being given the option to opt out.

Daily Caller has this…

Fox News host Tucker Carlson and a guest discussed Republican governors in 18 states asking for refugee resettlement despite being given an option not to do so.

Introducing the Friday night “Tucker Carlson Tonight” segment, the Fox News host recalled when Republican leaders once “made a big show of opposing Obama administration refugee policy” and supposedly “got their wish” when President Donald Trump won the 2016 election and signed “an executive order allowing cities and states to opt-out of refugee resettlement.”

However, “for some reason, no Republican governors are taking advantage of that,” Carlson said, noting that 18 GOP governors so far “have explicitly requested that more refugees be sent to their states.”

“We already have more than 20 million illegal immigrants living here,” Carlson said. “The last thing many struggling communities need is more low skilled migrants who may be great people but need a lot. They stress the schools and social programs while not fully integrating. That’s just true and anybody who lives in a community where it has happened will tell you that it is true. As with illegal immigration, the long term agenda of refugee settlement is to bring in future Democratic voters, obviously.”

I was called a libertarian the other day and it offended me to be honest.

But if this is what my fellow REPUBLICANS support, count me out.

Let’s just resettle them all in California where they can either adapt to the third-world, hellhole conditions or choose to return to their original third-world hellholes.

Since Canada is even more liberal than here, I think I’d like to move to Hungary.

Better yet let’s just hold their damn feet to the fire.

They work for us and they seem to forget that.

These 18 Governors give Republicans a bad name.