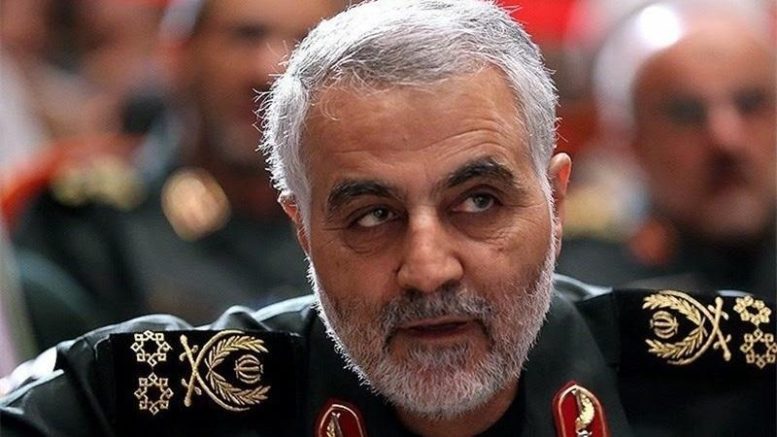 Several outlets are reporting that Zeinab Soleimani, 28 year-old daughter of Qassem Soleimani, is an American Citizen and now threatening suicide attacks within our borders.

Qassem Soleimani suicide brigade was formed to avenge the killing of the Iranian terror leader.

‘Voice of America’ confirms that #Soleimani’s daughter is a #US citizen herself and sworn om American flag! pic.twitter.com/4jrc7Q5TR0

SHOCKING! ‘Voice of America’ confirms that #Soleimani’s daughter that is directing suicide operations against the USA is a US citizen herself.

How? Can someone experienced look into this? “Soleimani’s daughter is a US Citizen.” https://t.co/Jo6VzcZjTc pic.twitter.com/tsEeTTof4T

Voice of America (Persian) wrote on Monday that Zainab is a US Citizen!

Here’s the translation: Zainab Suleimani, a 5-year-old daughter of Qassim Suleimani, is like many of the children of officials in the US citizenship system. They have sworn to the American flag to get their citizenship and are seeking revenge on America today. what is your opinion?

How did this happen?

#QassemSoleimani’s daughter has American citizenship like other Iranian lobbyists in the US who are working mostly in media and think tanks on US soil for Islamic regime’s interest.This issue should be considered & these ppl don’t deserve American nationality & protection 1/2 pic.twitter.com/lHKSMwSjSc

Here’s a video that highlights the above graphic.

The daughter of slain Iranian Gen. Qassem Soleimani warned the families of U.S. soldiers deployed in the Middle East that they “will spend their days waiting for the death of their children” during the funeral Monday in Tehran.

While speaking to a vast crowd at Enqelab-e-Eslami (Islamic Revolution) square, Soleimani’s daughter, Zeinab, directly threatened an attack on the U.S. military in the region, following an increase in tensions between Tehran and Washington.

“Families of the American soldiers in western Asia have witnessed America’s humiliation in Syria, Iraq, Lebanon, Afghanistan, Yemen and Palestine wars, and will spend their days waiting for the death of their children,” she said in Farsi, which was translated by The Associated Press.

At the funeral, Iran’s Supreme Leader Ayatollah Ali Khamenei – who had a close relationship with Soleimani – wept and prayed over his casket and the caskets of others killed during traditional Muslim prayers for the dead.

Esmail Ghaani, the general replacing Soleimani, reportedly stood near Khamenei during the funeral. Iranian President Hassan Rouhani and other top leaders within the Islamic Republic were also in attendance.

So would it surprise any of us if Soleimani’s Daughter really is an American Citizen?

Maybe she got on the Obama train.

Why were ANY Iranian’s granted citizenship during Obama’s reign of terror?

Obama bent over backward to please a country that would love to see every last American destroyed.

With those thousands of tons of cocaine came untold numbers of Hezbollah soldiers that could attack at any time.