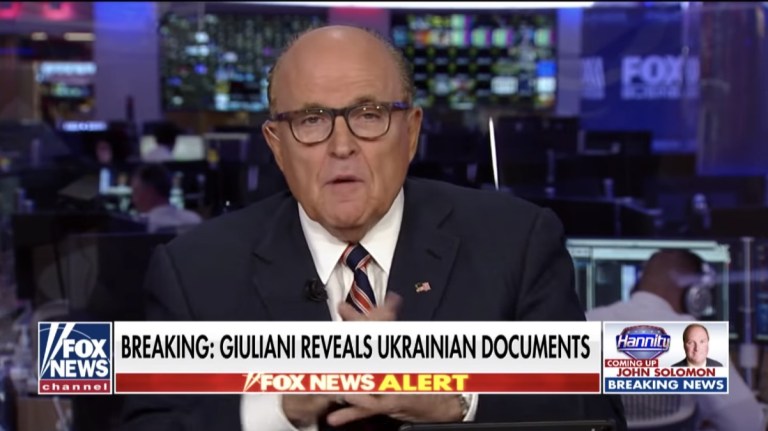 (TNS) In the background of impeachment nonsense, political postering by the Garbage Party, and the 2020 election cycle, presidential lawyer and former federal prosecutor Rudy Giuliani has been steadily working to uncover Democrat-related corruption involving Ukraine.

In an interview with Dan Bongino Monday, Giuliani revealed new and interesting information he says he has discovered regarding Joe and Hunter Biden, who appear to have used Ukraine as a retirement plan.

In addition, the two discussed Ukraine’s involvement in the 2016 election as well as the activities of former U.S. Ambassador to Ukraine Marie Yovanovitch, who claims she was victimized by President Donald Trump (the same president she worked — with Democrats — to undermine).

In commenting about the Justice Department inspector general report from Michael Horowitz, Giuliani said he thought it was good, but added he didn’t think the right conclusions were reached:

“I do not understand how you can engage in that kind of conduct and not have the intent to harm the election, not have demonstrated prejudice and bias…what they were saying is, ‘We hate Trump. We want to destroy Trump. We want him from becoming the President, if he becomes President, we want to take him out as President.’ They lied. They cheated,” he said.

The former New York City mayor also blasted fired FBI Director James Comey’s reckless disregard for the truth — just to ‘get Trump,’ a man he obviously did not believe deserved to win the presidency.

“Comey knew exactly what he was doing and he lied…And it would be a shame if he got away with it…And we should actually expect a little bit more verification when we’re dealing with a presidential candidate,” he said of Comey allowing an unverified ‘dossier’ to be presented to the FISA court.

As for the ‘black ledger’ that was leaked in August 2016 resulting in the immediate resignation of then-Trump campaign manager Paul Manafort, Giuliani said, “I have two witnesses who say, the guy who leaked it said, ‘We’re gonna now destroy [Trump].’ They thought they were going to take him out. They thought when they put out the ledger of Manafort getting the bribes, that that was gonna end Trump’s campaign.”

The Ukrainians didn’t do it on their own. The Ukrainians were asked to do that by members of Obama’s staff and a member of Biden’s staff. It was done in the White House on a specific date in January. There were two witnesses to that.

There’s another witness who met with Chalupa who works for the Democratic Nation Committee. He said give me all the dirt you can get me on Trump, Trump, Jr., and Manafort. She said. ‘I’m getting plenty and I’m turning it over to Isikoff.’ We have a text explaining to her boss, the comm’s director at the DNC…I could have given this to a first-year prosecutor in the U.S. Attorney’s office and they’d come back with convictions on every count.

That would be DNC contractor Alexandra Chalupa, who — as John Solomon has reported — “sought information from the Ukrainian government on Paul Manafort’s dealings inside the country, in hopes of forcing the issue before Congress.”

As for Guiliani’s statement, Bongino asked, “Isn’t this the very definition of collusion? Operators who had worked with the DNC in coordination with the prior presidential administration working with representatives of a foreign government and asking them to impact the election? What am I missing?”

What you’re missing is a press that has corrupted things so badly that our law enforcement systems at the very top are afraid of being criticized Dan. They’re afraid that if they take on this Biden case, they’re going to be criticized.

Biden’s bribery case is as clear as the nose on your face. I’ve prosecuted many bribery cases. It’s hard for me to think of one with stronger evidence. You’ve got a confession. You’ve got four witnesses. You’ve got documents. You’ve got money laundering up the you know what, that you can trace in a minute. I mean I swear to God, I could prosecute this with my eyes closed.

This whole scheme was put together by [Mykola] Zlochevsky [founder of Burisma], who thought he was going to lose his company because he’s a big crook. He stole $5 billion. He hears that Biden’s going to be the point man for Ukraine, Biden’s gonna give out all the money, he’s gonna be more powerful than the President. He hires Biden, not Biden’s son. He hires Joe, to protect him. To protect his business. And when it has to be protected, Joe comes through. That is exactly what happened…

How much money did they make in Ukraine? In Ukraine, they made $8 million. And it may get up to $15 million when they’re finished. In China, James Biden [Joe Biden’s brother], who never built a house in his life, was put into a half billion dollar housing deal in Iraq. And the kid who got thrown out of the military for failing drug tests, and bankrupted a company, became partners with The Bank of China. Then Joe blew his negotiations.

The constants here are: Joe becomes point man.  Joe fails in his mission to the U.S. In Iraq, he can’t get a status of forces agreement. In Ukraine, he can’t do a damn thing about corruption except contribute to it…But in each case, the Biden crime family made millions and millions of dollars. To me, it’s a racketeering case, a RICO case.

It should be noted that Giuliani’s findings — especially those regarding the Bidens and the DNC’s operations in Ukraine ahead of the 2016 election — fit with what Solomon and author Peter Schweitzer have discovered, as well.

It should also be noted that the Garbage Party and the Bidens exploited a country — Ukraine — for their own personal benefit at a time when the U.S. was its only lifeline against Russian aggression.

Real pieces of work, these people.