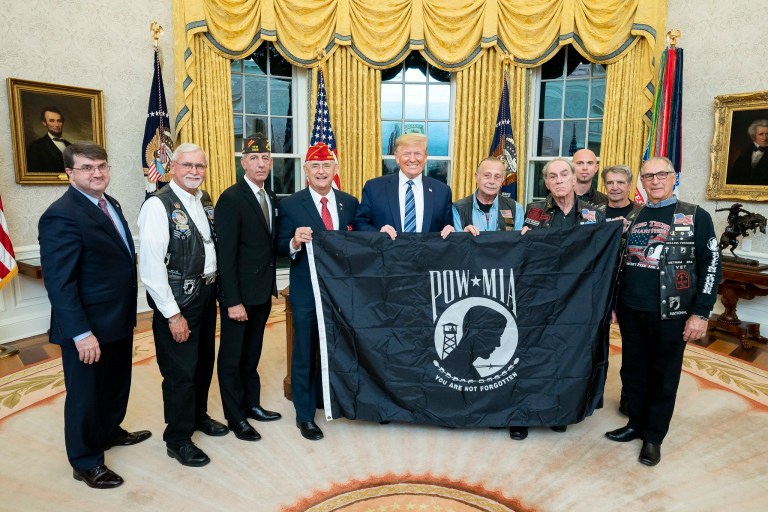 (TNS) While the unhinged Left including Democrats and their propagandists in the “mainstream media” continue to wail about President Donald Trump’s decision to take out the world’s foremost terrorist scumbag, Iranian Gen. Qassem Soleimani, we thought it appropriate to remind everyone just how many times the Iranians were warned.

Prior to his taking office, no one could be certain that Trump would be a man of his word, but as we’ve come to see over his three years in the White House, when he makes a promise, he keeps a promise.

That said, we (and others) were warning the Iranians that he was no Barack Obama — that, in fact, he was the anti-Obama, and the Iranians would do well to keep that in mind.

Early on, the Iranians tested Trump — and why not, given the fact that the Obama administration enabled and empowered the murderous regime to get the ‘nuclear deal’ — as we noted in December 2016, a month before his inauguration:

A top Iranian general says his country’s air defenses have “warned off” more than a dozen aircraft and drones during military drills the country is currently conducting, according to state media which, naturally, is nothing more than a propaganda arm for the government. Still, the claim bears some consideration, because it fits a pattern of increasingly aggressive behavior by Tehran since the Obama administration essentially paid the country off over a bogus “nuclear deal” so President Obama could have a “legacy.”

Behavior that, ultimately, will not end well for Iran, given the foreign policy and military team President-elect Donald J. Trump is assembling. …

Add to these confrontations the fact that the Obama administration did not punish Iran for its blatantly illegal capture of U.S. sailors in January, paid what was essentially a ransom to get back four American hostages (setting a terrible precedent in the process), and has made a “deal” that sees Iran keeping its nuclear infrastructure in place over the long term, and you can begin to understand why the mullahs running the Islamic republic feel emboldened to act out against American forces.

But this acting out will come at a terrible price under a Trump administration, if Iran continues to push and goad U.S. forces in the Persian Gulf and throughout the Middle East.

We’ve said it before and will say it again: The Iranians are playing with fire, betting that Trump is the buffoonish cartoon character the political Left has made him out to be. He isn’t. And if the mullahs make one wrong calculation, they’re going to find out just how wrong they were by paying a terrible price.

In February 2017, in response to provocative statements and actions from the Iranians, we noted again they were playing with fire — Trump fire:

One of Iran’s Revolutionary Guard commanders was talking tough again this week from the safety of his own country, bragging to his men that his country will give the U.S. a “strong slap in the face” if we continue to underestimate Iran’s capabilities.

As Reuters reported, the ‘warning’ came as Iran’s most elite forces were concluding war games.

“The enemy should not be mistaken in its assessments, and it will receive a strong slap in the face if it does make such a mistake,” said General Mohammad Pakpour, head of the Guards’ ground forces, quoted by the Guards’ website Sepahnews, Reuters reported. …

The fact is, the Iranians have been empowered by Obama to believe they’re something more than they are. … if Iran tries a “strong slap in the face,” the Trump administration will kick Iran’s ass. It’s just that simple. And probably in record time.

A year later, Harvard law professor emeritus Alan Dershowitz tried to warn the Iranians again that Trump was not Obama:

“President Obama made it clear that he was going to stand behind the Iranian regime,” Dershowitz told Fox News‘ “Fox & Friends” morning show.

He added that Obama emboldened Iranian leaders with a failed strategy to curb their nuclear development.

“He was going to send them lots and lots of money. Of course some of it was their own money, but still they used it to foment terrorism, to export terrorism around the world,” Dershowitz added.

He said Obama’s approach — appeasement — stood in stark contrast to the Trump White House, which is supportive of those currently protesting the regime.

“I think President Trump has indicated that he will not stand behind the Iranian regime. The Iranian regime is failing. The people there are hungry despite the infusion of cash,” the retired law professor said.

In July 2018, President Trump threatened to respond with force if pushed.

To Iranian President Rouhani: NEVER, EVER THREATEN THE UNITED STATES AGAIN OR YOU WILL SUFFER CONSEQUENCES THE LIKES OF WHICH FEW THROUGHOUT HISTORY HAVE EVER SUFFERED BEFORE. WE ARE NO LONGER A COUNTRY THAT WILL STAND FOR YOUR DEMENTED WORDS OF VIOLENCE & DEATH. BE CAUTIOUS!

A year later — and after more provocations by the Iranians including the deaths of American service personnel and contractors, the president’s warning wasn’t heeded, and Soleimani was sent to hell by a Hellfire missile.

You can bet this president has the attention of the Iranian regime now.

Instead of being criticized for finally standing up for American lives and sovereign interests, Trump should be praised for having as much patience as he did with a terrorist-sponsoring regime that essentially declared war on America long, long ago.