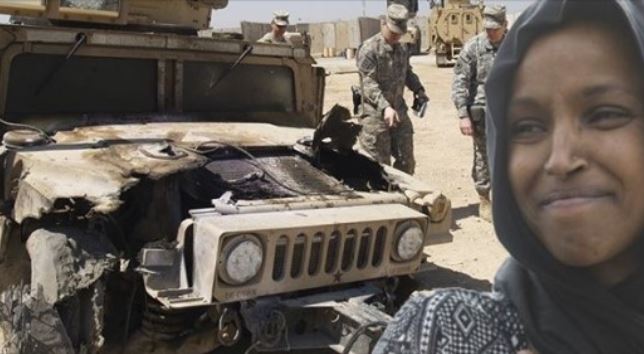 Opinion| Mark Sidney| Ladies and gentlemen, I present to you, the face of the modern Democrat party of the United States of America: Ms. Ilhan Omar.

I must say, I am not quite sure who is more representative of the current values of the modern day Bolsheviks … errr, Democratic Part Alexandria Ocasio-Cortez, or Ilhan Omar.

Here are the two candidates for unofficial face of the Dems:

Up until the recent incident with Iran, I was leaning toward AOC being the best poster child for Nancy Pelosi’s ‘wack pack.’ Ocasio-Cortez and her ‘Green New Deal’, which was likely originally drafted in crayon, (that is a joke ‘fact checkers’) is perhaps the most absurd economic plan since Keynesian economics first burst on to the scene.

The Cato Institute explains the absurdity of Keynesian economic theory:

Hurricanes are good, rising oil prices are good, and ATMs are bad, we were advised: Destroying capital, lower productivity and costly oil will raise inflation and occasion government spending, which will stimulate output. Though Japan’s tsunami and oil shock gave it neither inflation nor stimulus, worriers are warning that the current oil price decline, a boon in the past, will kick off the dreaded deflationary spiral this time. I suspect policy makers heard this, and said to themselves “That’s how you think the world works? Really?” And stopped listening to such policy advice. …in Keynesian models, government spending stimulates even if totally wasted. Pay people to dig ditches and fill them up again. By Keynesian logic, fraud is good; thieves have notoriously high marginal propensities to consume.’

However, now that the conflict with Iran has essentially gotten the Democrats to uncloak as enemies of America, (in my view) because of this, I think I now find Omar a better standard bearer.

Now, to be clear, I do not think that being anti-war is ‘anti’American’ or is proof that one an hates their country. In many cases I think that it is quite the opposite actually.

The anti-war movement that successfully prevented an unwarranted US participation in the civil war in Syria, despite the best propaganda and provocations of McCain and his Neocon hawks, was perhaps one of the most patriotic efforts in the modern era.

What I take issue with is some Democrats putting their hatred for Trump, above their love for their country.

And, no, this is not a partisan issue, I also believe that those who tried to prevent our incursion into Iraq were on the right side of history when ‘Republican’ George W Bush, condemned countless Americans and Iraqis to death by invading the oil rich nation, which had 0 to do with 9/11/.

In Ilhan Omar’s case, we have plenty of video evidence, which I believe, suggests the woman flat out despises America, our culture, our history, and all that we stand for.

Keep in mind the woman is a refugee from a festering wound of a nation (when it comes to law, order, justice and woman’s rights) who has become a member of the MF’ing US Congress. Yet she still seems to resent the nation that took her in.

Just watch her body language when discussing the United States of America, Hezbollah and Al Qaeda:

I’m sure you remember Alan Bender and the allegations he made against Ms. Omar in a sworn deposition, to a Florida court.

‘In testimony given in the Florida court, a copy of which was sent to the Jerusalem Post, Bender claimed that both Omar and Linda Sarsour were members of the Muslim Brotherhood.

“They [the Qataris] called her Sister Ilhan, which is a term you only use when you’re a member of the Muslim Brotherhood. So Abdullah al-Athbah, he refers to Ilhan Omar as Sister Ilhan, and Sister Linda, which is Linda Sarsour, another activist who is now going to run for Senate,” Bender told the court.

“Somebody recommended her to the Qataris. They had several names, several options to pick from, to appoint – ‘they call her winning the elections is an appointment.‘”

Omar was chosen, Bender said, because her father had a history of carrying out “very violent interrogations,” as a high ranking officer in the Somalian army, “and they thought that would be very suitable because the more dirt you have on your candidate, the easier it is to control the candidate.”

She also said to have had other perceived weaknesses which made her a suitable recruit. Bender told the court he questioned why a devout Muslim such as Omar would take bribes, only to be told, “don’t be fooled by her head scarf. She’s a sex maniac, and she’s very weak when it comes to money and sex. And we got both.”

The claims are being supported by London-based Kuwaiti activist Abdullah al-Saleh, who on Tuesday evening tweeted: “My name is Dr. Abdullah al-Saleh and I was the guest of the Qatari government and Prime Minister for 6 months. I learned of their operations in the West and can testify and confirm that everything Alan Bender said in his deposition regarding Rep. Ilhan Omar and Qatar is true.”

Mr al-Saleh, who has a following of 123,000 people on Twitter, sent the Post a photograph of himself posing with members of the Qatari royal family to support his claim.’

The article contains a lot of bombshell claims. I would not feel right including that Bender also accuses Jared Kushner of working with/for the Qataris. We need to remember all these claims are allegations at this point, sworn to a court under penalty of perjury, but still, allegations none the less, and in American EVERYONE is innocent until proven guilty beyond a reasonable doubt.

However, when you combine them with the plethora of evidence suggesting where Omar’s allegiances actually reside, what I believe to be, a pretty convincing narrative begins to form.

How about this clip of Shelia Jackson Lee speaking this week, discussing dead Americans in Iraq. Just watch Omar’s behavior:

This one is just beyond belief. How anyone, asset of a hostile foreign power or not, would think it is acceptable to behave this way during such a solemn speech, on such a troubling topic, is in anyway acceptable, is beyond my comprehension.

The arrogance is exudes tells a story in and of itself.

Again, it is important to remember these are all allegations at this point. We do not know anything for sure, as always, it is up to you to draw your own conclusions. I just have one question … where the hell is the DOJ?