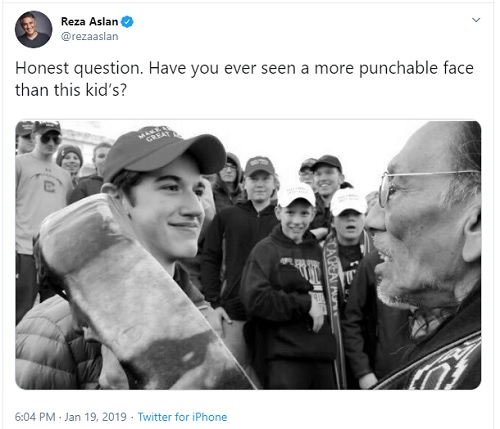 This week CNN settled with Nick Sandman for an undisclosed amount.

In case you missed that…

The very next day he filed another suit against CNN Host Reza Aslan.

The revenge of Covington high school students continues. Just one day after CNN came to a settlement in their defamation lawsuit with Nick Sandmann, lawyer Robert Barnes announced he was suing Reza Aslan, the disgraced former CNN host, for a minimum of $135,000 in damages. Barnes represents 8 Covington High School students.

Reza Aslan’s tweet of January 19, 2019 features an image of Sandmann and poses the question: “Have you ever seen a more punchable face than this kid’s?”

The tweet was widely criticized by people from all over the political spectrum for being an inappropriate incitement to violence and for improperly suggesting that Sandmann and his classmates had been harassing an elderly Native American man—a narrative that was debunked.

According to PJ Media the suit names a variety of public figures including “Ana Navarro, Sen. Elizabeth Warren (D-Mass.), Maggie Haberman, and Kathy Griffin.” PJ Media also reports that “According to the lawsuit, the tweet calling Sandmann’s face ‘punchable’ further spread the false narrative that the Covington Catholic boys had aggressively insulted the Native American man, when that was not the case.”

Aslan deleted his tweet earlier today. The Post Millennial reached out to Barnes who said that “Aslan may be a facing a serious six-figure verdict, which could have been even worse had he not deleted his tweet when he did.”

Sandmann is obviously not playing games and intends to make these networks and personalities pay.

Maybe they will be funding his college education.

I hope Sandmann makes them all pay.

Though no one outside of the lawsuit know for sure, I doubt his settlement with CNN was anywhere close to the $275 Million he asked for.

Legally that means no admission of guilt, but realistically it means they know they were wrong and paid to try to cut their losses.

Hopefully Nick Sandmann marches on and takes a big chunk of money from others who wronged him as well.