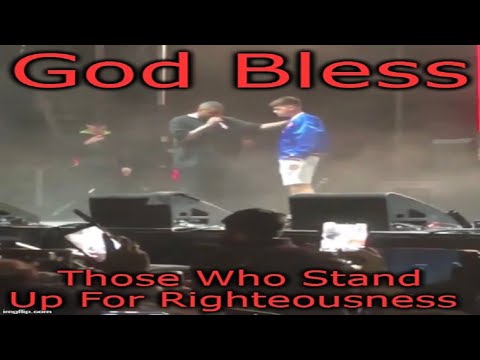 As disturbing as the following story is, it also proves that not ALL of our young people are hopeless.

This young man stuck to his guns and refused to say “F**k Trump” in front of an auditorium full of rabid fans.

He stuck to his principles rather than bowing to peer pressure.

In October, a rapper named YG pulled a teenager up on stage and shamed him when he noticed that he wasn’t singing along to his anti-Trump anthem.

The teenager is now breaking his silence about the viral incident.

In an open letter to the rapper posted to Twitter, 17-year-old Austin Joyner explained that he was the boy in the video and that the rapper’s actions made him unsafe.

Many platforms depicted this story inaccurately

Here is the truth and I wrote a letter to YG.

Please help me get my message out! pic.twitter.com/NTFVzikzpH During his set at the Mala Luna Music Festival in Texas, YG demanded that Joyner say “f-ck Trump” and became aggressive when the fan refused.

“I spotted you in the crowd, I asked if you f**k with Donald Trump. You said, ‘You don’t know.’ So since you don’t know, I need you to make up your mind tonight,” YG said to the young man.

He demanded the fan say his name, noting that his family would be watching, which the fan also refused to do.

Austin Joyner is like a lot of kids, and a lot of us were like him when we were young.

He is simply trying to find his niche in life.

He may listen to music that many do not approve of, though he does make it clear he is not a YG fan, but that does not mean he is without merit.

This kid did what so many would not be willing to do when faced with peer pressure.

He stood his ground and stuck to his own personal moral code.

Here is a video of the event, along with commentary.

Think back to when you were 17.

What would you have done?

Would you have had the courage of this young man?

When I was 18 I went to a organizational meeting for The College Democrats as a Freshman at Washburn University.

They elected me secretary at the first meeting and I never showed up again.

I wanted to get in the Yearbook. 🙂

32 years later I am a conservative political writer.

So is there hope for young people like these?

Not if they listen to their college professors, it would seem.

But do not underestimate our youth.

Many of us were a bit wild and crazy when we were younger and somehow turned out just fine.

Austin Joyner is symbolic of what is RIGHT with many of our young people in America.

We’ve seen much of the bad, but don’t assume ALL of our kids are headed in the wrong direction.

Most are just trying to find their way.