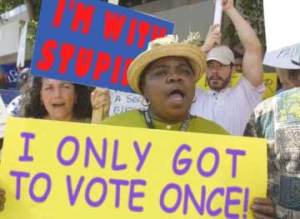 It’s a cornerstone of our democracy: Government is to be of the people, by the people, and for the people, deriving its authority from the consent of the governed.

These fundamental principles are at stake in North Carolina, due to a ruling from an activist federal judge on voter ID.

It’s amazing that we’re still having this debate today.

Presidents from Jimmy Carter to Donald Trump have advocated for the use of IDs to protect the integrity of the vote, and the Supreme Court has confirmed that states have the right to safeguard their elections. Thirty-five states have done so already, passing laws requiring voters to show identification before casting their ballots.

Against that backdrop, voters in North Carolina overwhelmingly approved adding an ID requirement to the state constitution in 2018. The General Assembly quickly took up the task of drafting a law to put that mandate into place.

The result was a voter ID law that is a model for the nation—making it easy to vote, but tough to cheat.

We got the system in place just in time for the 2020 election cycle. When North Carolinians stepped into the voting booth, they were to have confidence that their vote was protected.

But just a few weeks ago, an unelected federal judge tossed it aside. In a 60-page ruling, Obama appointee Loretta Biggs struck down our voter ID law, calling it “discriminatory” and comparing it to the dark American legacy of slavery and Jim Crow.

Never mind that our voter ID law was co-sponsored by an African American Democrat and passed with bipartisan support.

Never mind that the constitutional amendment was approved with majorities in 82 out of the state’s 100 counties.

And never mind the mountains of data that show that voter ID can ensure free and fair elections without turning legitimate voters away.

The people that the left is supposedly concerned about stand to gain the most.

In North Carolina, as in most parts of the country, you need an ID to open a bank account. To visit your child at school. To rent a home. To qualify for welfare. Even to return a purchase at Walmart.

Our state’s new IDs open up all of these opportunities to people excluded from them in the past, on demand, and at no cost to the person.

Voter ID isn’t the problem. What’s truly troubling is the belief that minority citizens are not capable of obtaining a photo ID and participating in the most basic transactions in our society.

The only reason to oppose photo voter ID is if you intend to commit fraud at the ballot box.

The people of North Carolina spoke clearly when we added voter ID to the state constitution: We’ve had enough chaos and doubt in our elections.

Activist judges must stop this cycle of last-minute decisions that erode faith in the democratic process.

Dan Forest is the lieutenant governor of North Carolina.