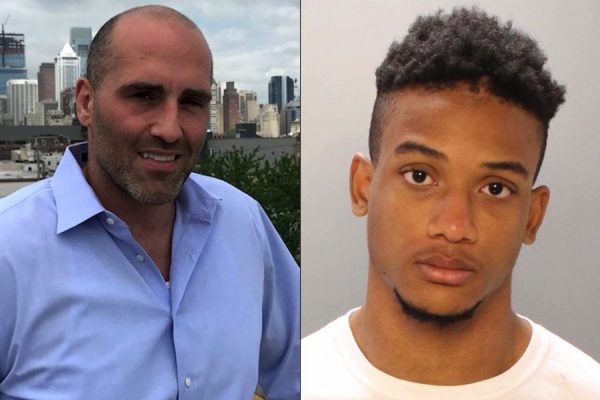 Sean Schellenger was a white man, who played quarterback at Penn State. He lived in Philadelphia, a 41 percent black city. He was murdered in 2018 by a black male.

This black male was acquitted of the charge of murder, and will only face two years of probation for murdering Schellenger (of course, the probation is for tampering with evidence, since he was cleared of manslaughter).

In fact, 22-year-old Michael White is a celebrity to the black community of Philadelphia. One black journalist wrote about how she hugged him when she spotted Michael White walking on the streets of city… [Michael White’s lawyer: ‘When I saw him, I saw my son, wide-eyed and like a deer in headlights’, Philadelphia Inquirer, October 22, 2019]:

It had been seven years since Keir Bradford-Grey, who heads the Defender Association of Philadelphia, had stood before a jury and litigated a case.

But there she was representing Michael White, 22, who had been charged with fatally stabbing real estate developer Sean Schellenger during a scuffle near Rittenhouse Square last year.

And this wasn’t just any old manslaughter case but one that had attracted national attention because it symbolized long-standing tensions over race and class.

As the mother of a black boy, the 45-year-old chief defender brought a unique perspective.

So she went to attorneys Jonathan Strange and Dan Stevenson, who initially headed up White’s defense, and “they were gracious enough to allow me to be part of the team.”

“When I saw him, I saw my son, wide-eyed and like a deer in headlights. [He was] not a malicious kid but someone who could get into an unfortunate situation. That’s what I saw when I saw Mike,” she told me Monday during an interview at the Defender Association office, at 1441 Sansom St. “I didn’t see a troublemaker. I just couldn’t see that in his face, let alone when he talked to me.”

Bradford-Grey is sensitive to how America perceives black males as threatening and criminal. She didn’t want White’s case to go the way of the five falsely accused boys portrayed in Ava DuVernay’s 2019 docudrama When They See Us .

She also didn’t like the narrative that she kept seeing in the media about White being an instigator because he involved himself in an exchange between Schellenger, who was white, and a motorist blocking traffic at 17th and Chancellor Streets.It annoyed her how reporters described White — who testified that he was on a break from college at the time of the stabbing — as a food deliveryman, because it “drives a certain perspective.”

“He was just a private kid who didn’t know who to trust,” Bradford-Grey said of White, who had been accepted to eight historically black colleges. “He’s very expressive in his poetry, but it was hard for him to talk about himself.”

Bradford-Grey argued in court that White, who pulled out a knife during his encounter with Schellenger, had acted in self-defense. “It was never his intent to kill him,” she told me.

“I kept saying: ‘Please let them see what we see. I hope we did a good enough job. I hope we brought to light what we needed to,’ ” she said. “And I hoped that they looked at him when he testified and saw who this young man was and who he wasn’t and who he was being portrayed as.”

On Thursday, White was acquitted of all charges except tampering with evidence. His sentencing is scheduled for December.

Shortly after the verdict, I spotted him walking along Market Street. I ran up and all but grabbed him after he told me the verdict. A friend who was with me gave him a bear hug.

We were sad about Schellenger’s death, but excited that White had been acquitted and that he had gotten a second chance at life.

As for Bradford-Grey, she felt like celebrating but went home and slept. I’ll bet it was her best sleep ever.

In a city where black elected officials push to ban bullet proof glass at convenience stores because it represents an “indignity” to blacks, what type of justice did the family of a white man murdered by a black man expect to get?

His name is Sean Schellenger. His life mattered too, but we all know what being white in Philly means, right?Rest in peace, Sean.