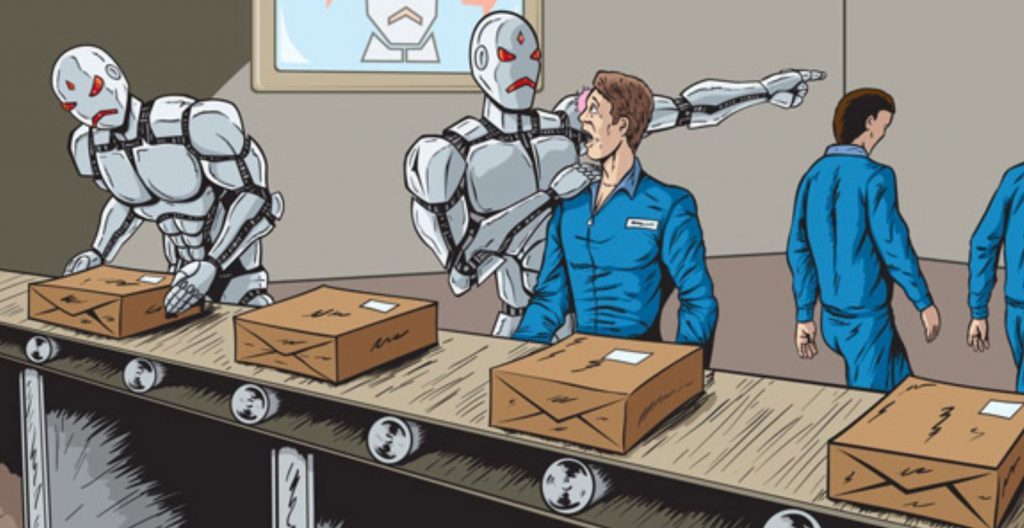 A Walmart Supercenter in Salem, New Hampshire, has been the first store to test a new kind of technology that will use robots to collect grocery items for online order fulfillment.

Walmart is one of the largest companies in the world by revenue, with at least 2.3 million employees in the US, has seen rapid increases in labor costs that are forcing unwanted margin compression.

The solution offered by C-suite executives has been a pilot program of automating a warehouse in Salem with the goal of deploying robots to eliminate employees and save costs.

We’re investing in the future of online grocery pickup and delivery with first-of-its-kind technology. Meet Alphabot, the system working alongside associates: https://t.co/zTwv13124M pic.twitter.com/50dWk6Alcc

The new robot is called Alphabot, and it’s ten times faster than a human worker – this would increase productivity in the warehouse, driving down the need for new hires during peak holiday periods when orders increase.

Alphabot operates inside a 20,000-square-foot warehouse that retrieves refrigerated and frozen items ordered for online grocery.

Once the robot completes an order, it delivers it to a workstation, where a human checks, bags, and delivers the final order.

Brian Roth, a senior manager of pickup automation and digital operations for Walmart, said Alphabot would transform the company’s online grocery operations in the early 2020s.

“By assembling and delivering orders to associates, Alphabot is streamlining the order process, allowing associates to do their jobs with greater speed and efficiency,” Roth said. “Ultimately, this will lower dispense times, increase accuracy and improve the entirety of online grocery. And it will help free associates to focus on service and selling, while the technology handles the more mundane, repeatable tasks.”

Roth expects the robots to increase fulfillment speeds and create more convenience for customers that would rival Amazon.

Walmart said the pilot program in Salem had been underway for six months. The rollout of automating other warehouses across the country could be nearing.

The trend in automation will undoubtedly lead to significant layoffs at Walmart through 2030. As we’ve mentioned before, automation will displace at least 20 million US jobs in the coming years.

This article was sourced from Zerohedge.com