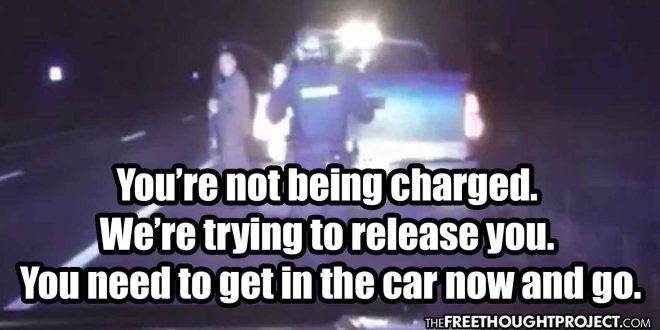 Cleveland, OH — On Christmas night, Twinsburg Police Department (TPD) officers gave an unnamed captain of the Cleveland police department a stupendous Christmas gift. They caught the captain visibly drunk, behind the wheel of his car, and let him go without so much as a slap on the wrist. Not only did they not arrest him for being drunk and in command of his personal vehicle with his service pistol on his hip but allowed his wife to come pick him up from the side of the road—a convenience not often afforded to non-law enforcement.

The captain’s identity is known but Fox 8 reporters are guarding his identity as a carefully kept secret principally because he was not charged with any crime whatsoever. Twinsburg police received a 911 call from a citizen who claims to have witnessed the captain’s vehicle “going across lanes” on I-480. The motorist told TPD the car eventually pulled over to the side of the road. Dispatch sent out officers to investigate.

When TPD officers arrived, they found the captain behind the wheel of his car and began their investigation. They asked the captain from where he was coming and if he’d had anything to drink. Undeniably slurry was the captain’s speech when he told TPD he was coming from “Cleveland” and that he didn’t have “much at all” to drink. Later he changed his story and said he just “got tired” and pulled over. One TPD officer commented:

The two TPD officers who were on scene then conversed with themselves on what to do with the captain. While speaking with the captain, the female officer can clearly be heard asking questions and receiving answers. However, while speaking with her male colleague, the female cop’s voice could not clearly be heard leaving some to question if the TPD officers were attempting to conceal their conversation and statements from being recorded.

For example, when the female officer began speaking with her fellow boy in blue, the microphone kept picking up residual noise, banging and clanging, making it nearly impossible to intelligibly decipher their conversation.

Somewhere along the way, the decision was made to call the officer’s wife and ask her to come pick him up. “You got somebody who can come pick you up,” the Cleveland PD captain is asked. Then, on a call with a presumed superior at TPD, one officer described the situation. “It’s clear that he’s highly intoxicated. And he’s carrying a service weapon on him…We are giving him a courtesy and allowing his wife to pick him up and take him home,” the female officer informs.

Still not seemingly understanding what was happening, the captain asked what he was being charged with. He, like most of our readers, was apparently baffled he could drive drunk and get away with it. The two TPD officers did, however, confiscate his service weapon from his person before letting his wife drive him home.

Because of their investigation into the free pass the drunk cop got on the side of the road Christmas Day, both police departments are conducting internal investigations.

These facts remain. A high ranking police officer inside the Cleveland Police Department’s Fourth District was observed driving his vehicle erratically. When cops investigated they neither conducted a breathalyzer nor a field sobriety exam. They then called someone to come get him. Yes. That’s right America. The so-called “heroes” of our society let an alleged criminal get away Scot free. And this is par for the course.

Bill Gates Being Charged For Murder: This Is How You Stop The Virus
November 29th, 2021 Sons of Liberty Media