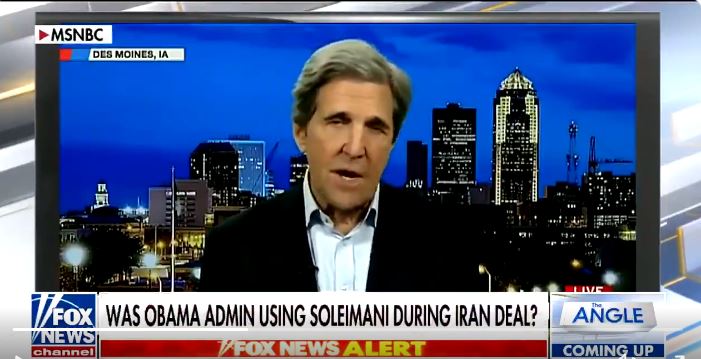 Opinion| Mark Sidney| John Kerry has turned out to be a real gem of a diplomat … for Iran.

Remember that many of the men that served with Kerry in Vietnam had … questioned … ‘details of his military service record and circumstances relating to the award of his combat medals‘, is back at it.

In fairness, many others said these claims against Kerry were untrue, and the leftist ‘fact checkers’ seem to imply that all the allegations about Kerry and his service are false, and politically motivated, so I will let you decide what you think happened.

Snopes, the be all and end all when it comes to which opinions are valid on the internet, wrote: ‘How well all of these men knew John Kerry is questionable, and discrepancies between how some of them described Kerry thirty-five years ago and how they describe him today suggest that their opinions are largely based upon political differences rather than objective assessments of Kerry’s military record.’

When Kerry got home from the war he was a favorite propaganda agent of the those who were against the war. Those who wanted to paint our Troops as savage war criminals were also likely fans of Kerry:

However, judging from Kerry’s recent actions, something tells me that loyalty is not one of his strong suit.

This week Kerry appeared on MSNBC to talk about how terrible a job the United States, under President Trump, was for killing ‘Soleimani, the head of the Iranian Revolutionary Guard Corps-Quds Force, a U.S.-designated Foreign Terrorist Organization,” the Defense Department (DOD)’ stated, and Fox News reported. Kerry seemed to suggest that we owe gratitude to Iran, for not killing us all, after they attacked out embassy via their proxy army.

This actually now makes me wonder, when our Iraqi embassy was attacked, Benghazi style, I wonder if Obama, Kerry & co had anything to do with the attack. After all, we know Kerry was, at least as of recently, back channeling with the Mullahs’ regime.

Remember when ‘KERRY CONFESSE[D]: Yes, I Negotiated With Iran Behind Trump’s Back’? Well, we do and now we are wondering what role (if any) he had in this fiasco, which sure felt like it was planned to try and make Trump look bad.

Why do I think this attack may have been carried out in part, to make Trump look bad (which failed miserably btw) even though Trump got to take out the biggest terrorist in the world, and the US paid no price? Mainly because of Kerry’s past dealings with Iran, allegedly trying to counsel them concerning how to combat Trump, and his desire to scrap Obama’s legacy cornerstone, the Iran deal.

More than this, the media already had the talking point ready, that this was going to be ‘Trump’s Benghazi.’  But, wait, I thought Benghazi was a ‘conspiracy theory?’

Alright enough backstory. So back in June, Iran shot down one of our drones, Trump could have used this provocation to annihilate Iran, but he didn’t. Then Iran leads a proxy army to attack our embassy in Iraq, so Trump decided to needed to nip these escalations in the bud.

Apparently when our consulate in Benghazi was under attack the Obama admin allegedly refused to let men who wanted to go rescue those stranded, do so, according to Real Clear Politics, and many other outlets, including men who were on the ground in Benghazi, watching their brothers die.

‘Fox News has learned from sources who were on the ground in Benghazi that an urgent request from the CIA annex for military back-up during the attack on the U.S. consulate and subsequent attack several hours later on the annex itself was denied by the CIA chain of command — who also told the CIA operators twice to “stand down” rather than help the ambassador’s team when shots were heard at approximately 9:40 p.m. in Benghazi on Sept. 11.’

Now in my own OPINION Snopes whitewashed this story, so if I want to maintain my distribution on Facebook, I can not take the word of the men who were there in Benghazi, I need to tell you that Obama was a hero and acted within minutes of learning of the attack.

Anyway, so after the consulate attack, Trump kills a terror leader in a precision strike, with 0 collateral damage. No one was hurt, other than those in the truck with the terror leading General, it was a flawlessly executed mission, as far as we can tell.

Oh, and let’s not forget that Iran shot down a freaking passenger jet containing 176 innocent civilians (that’s a guess, there may be more to that story, or some military agents on board.)

The Gateway Pundit explained: ‘Rather than escalating the US military attacks on the rogue regime President Trump announced new sanctions and a warning to the Iranian mullahs.

But Democrats no longer make decisions or view events based on reality.

On Monday former Obama Secretary of State John Kerry praised the disciplined and restrained Iranian regime for their actions this month.

John Kerry: It’s a sad day when the United States of a America has to rely on the decision of a regime that we neither like nor trust to have them be the ones who behave, somehow, in a way that somehow saves Donald Trump from his own decision.

Laura Ingraham went off on Kerry later tonight on her show.

Laura Ingraham: Just so everyone understands what he just said, John Kerry, former Secretary of State just said that Iran deserves credit for being restrained and reserved after that attempted attack on our embassy, after everything they’ve done to kill American soldiers with IEDs, the terrorism throughout the Gulf region, our former Secretary of State just siding with Iran!

John Kerry: It’s a sad day when the US has to rely on the decision of a regime that we neither like nor trust to have them be the ones who behave in a way that somehow saves Donald Trump from his own decision

Laura Ingraham: Our former Secretary of State is siding with Iran!!! pic.twitter.com/ALW8hidcDU

Yeah, I read that as Kerry praising Iran for not hitting us with their rockets (I guess they are only good at hitting civilian passenger jets) and condemning Trump for killing a world renowned terrorist with the blood our countless men, and likely woman and children on his hands.

They will stop at NOTHING to save their own hides. Sorry guys, and gals, it’s not going to work.

A Man That Saw The Catastrophic Events Of 2020 In Advance...