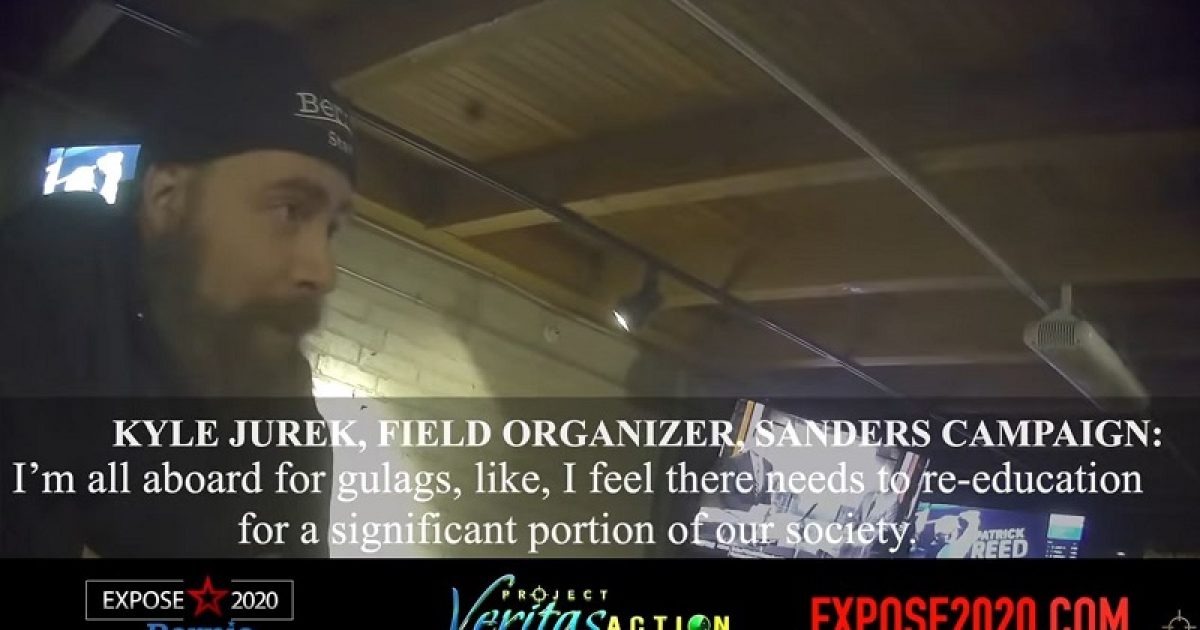 On Wednesday, James O’Keefe’s Project Veritas reported that the Secret Service has been notified of concerns that a deranged lunatic working for Democrat Bernie Sanders might try to murder President Trump.  The news comes as the group released its second video featuring Kyle Jurek, an Iowa field organizer for the Bernie Sanders presidential campaign.

According to Project Veritas:

…Jurek is secretly recorded praising Gulags and speaking favorably about forcing Americans who oppose Sanders’ radical policies to be re-educated. Jurek, a self-described Anarcho-Communist, reveals that several of his colleagues are also farther left than the Democratic Socialism the campaign presents to the public. Jurek also implies that there are plenty of Antifa group members who are part of Sanders’ campaign, a group known for its violent actions in the streets across the United States. The recordings give insight into the mindset of many Sanders staffers and what they truly believe.

Project Veritas posted some of the responses they received from Jurek:

JOURNALIST: “That’s just crazy, what that guy said. I mean I know we have a lot of the Communists, the Marxists on our side but…”

KYLE JUREK: “Yeah. In fact, there’s, that I know of, one two three… four, four of the organizers in this office are leftists, of some degree, further left than the Democratic Socialists.”

KYLE JUREK: “The degree varies but many of the organizers are, actually, I didn’t even count Justin, so Justin, me, Derek, Danielle, Jessica… we’re all further left than the Democratic Socialists.”

KYLE JUREK:“We’re all further left than the Democratic Socialists.”

JOURNALIST:“Yeah. What would you consider yourself? Like where on that spectrum…”

KYLE JUREK: “I’m an Anarcho-Communist. So, I’m as far to the left as you can possibly get.”

He also seemed to advocate the mass murder of those who disagree with Sanders, all in the name of saving the planet:

KYLE JUREK: “I mean the whole basis of Communism is like people and planet above property. Like we’re here to preserve the planet, to preserve people, right? We don’t want to have to, but if we f*cking, if people are going to try and fight back against the revolution, so when you hear about like atrocities committed in Cuba by like Fidel and Che, like killing people, those people who were actively like, they were like anti-revolution. They were fighting against the revolution. Like in any war, like you guys were in war, and you encounter people who were fighting against you, what did you do?”

KYLE JUREK: “Right.  Same thing holds true in a revolution. Right like you can’t abide people actively working against your f*cking revolution. Like you can give them a choice like hey, you can join the revolution, you cannot be a bootlicker, you could sit idly by and allow it to happen, but if you’re going to take up arms against the revolution, then you should expect a violent response. Right? Like it’s f*cking natural.”

JOURNALIST: “Fight or die. Yeah. That’s what they said in the Revolutionary War.”

KYLE JUREK: “Yeah, and that’s where we’re at right now. We’re at one of those moments in human history, we’re fighting for survival, we’re fighting for both survival of the entire human race, we’re fighting for the survival of living creatures on planet earth, and there’s some people who will stop at nothing to preserve that, right? Like to see, to see the human race continue into the future. Right? To try and save the planet from f*cking destruction. Like and no matter what country and what laws were, that exist, they’re irrelevant to, there are things greater than those systems, right?”

KYLE JUREK: “There are things that are more important than the rule of law in the United States, when it comes down to the existence of the human race.”

And he admitted participating in Antifa activities, however, he said he has”…yet to punch a Nazi, but I will, one day.”

In other words, he hasn’t assaulted what the left calls anyone who supports Trump, but he intends to do so someday.  Just think, THIS is what’s working for Bernie Sanders.

“There are some here, a lot of them are probably on the Bernie campaign, but there is a DSA chapter here so like some of the DSA folks would probably… we’ve been looking for an action to like participate in…like in regard to immigration and ICE, we’ve been looking for something to pop off so we can f*cking pop right back off,” he said.  “But I will, one day. One day I’ll get a chance.”

Project Veritas said it has received “several” anonymous tips from people who say they know Jurek.  One tip reportedly came from a Sanders campaign staffer who said “Sanders Iowa State Director Misty Rebik knew of Jurek’s radicalism and should have never hired him.”

Even more disturbing is a tip from people who know Jurek personally. They say Jurek is dangerous and becoming more radicalized. They worry he might try to assassinate President Trump. Our General Counsel has reported this information to the US Secret Service.

More and more, it seems that radical Democrats really do want a second bloody civil war.

On a final note, one should never forget that it was another deranged Sanders supporter who shot GOP Rep. Steve Scalise as he attempted to murder Republicans.  Other liberals, including some in the media, hailed the man as a hero and suggested Scalise deserved to be shot because of his conservative views.