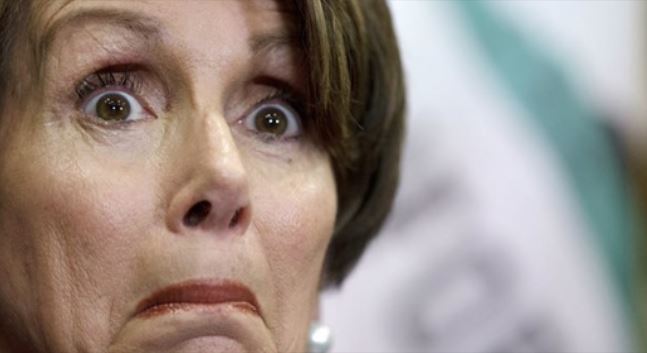 Opinion| Mark Sidney| I know this may come as a shock to you, in fact I know that it make just shatter your world view into a million separate pieces, but it is time that we told you ….

Democrat Speaker of the House, or ‘Ol’ Iron Liver’ as she is known in our home, Ms. Nancy Pelosi, does not always tell the truth.

In fact, I am starting to believe that Nancy could be allergic to truth.

Ok, All joking aside (well, no promises, but I will do my best), Nancy doubled down on some of the lies that Adam Schiff had the gall to utter on the floor of the House, lies which sent shockwaves though the nation as a whole.

Do you remember when Schiff completely lied about the contents of the now famous, Trump, Zelensky phone call?

I have a feeling that this is not going to come as much of a shock to you, but now Nancy Pelosi has just repeated some similar Bravo Sierra on the floor of the Representatives.

‘House Speaker Nancy Pelosi on Wednesday lied from the House floor about what Trump said during his July 25 phone call to Ukrainian President Volodymyr Zelensky.

Pelosi named impeachment managers on Wednesday morning ahead of the House vote.

The Speaker spread more lies about Trump’s call with Zelensky and claimed Trump said “do me a favor.”

The President said “us” meaning the country — he did not say “me.”’

Democrats are STILL LYING about what President Trump said in his call with Ukraine.

The transcript is clear: President Trump said “us,” meaning the country. He did not say “me.”

Why does Nancy Pelosi need to lie? Because they know the truth exonerates President Trump! pic.twitter.com/rxNJqEneg4

“What does the president say? I want you to investigate the Bidens and this debunked conspiracy theory pushed by Vladimir Putin that also helps my reelection,” Schiff stated, seemingly representing that we has in fact ‘quoting’ President Trump.

Well, there is one unfortunate Truth that the Democrats seem to refuse to accept: President Trump just did not say ‘do ME a favor’, it flat out did NOT happen.

However, we would be foolish to be surprised at such disgraceful behavior by the modern, American …. based, Bolsheviks.

As The Gateway Pundit pointed out, this is just what we should expect from this wack pack. The concerning part is that ‘the serial liar Adam Schiff and now he’s the lead manager in the impeachment trial.’

This is why no one who works for as living (or thinks for themselves) can support the Democrat Party any longer.

Help us Expose Nancy and her disgusting lies.

This may not be reprinted without expressed permission from Illicit Info.