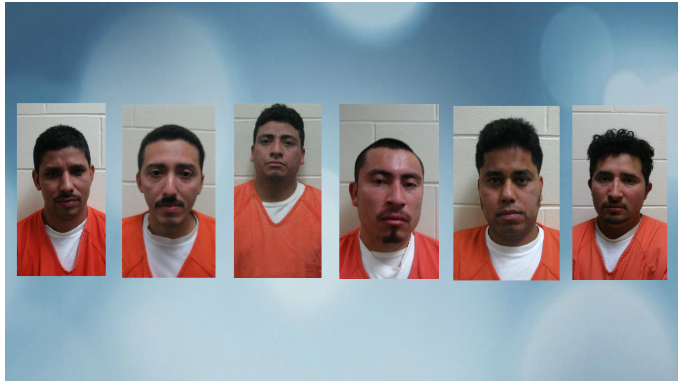 Here’s just another friendly reminder to build the wall.

This is the latest example of bad guys with bad intentions entering America.

Authorities have arrested 6 men in Wisconsin in connection with child grooming activities.

MANCHESTER, WI (Channel 3000) – The Green Lake County Sheriff’s Office has arrested six people in connection with a sex trafficking case, according to a news release.

Law enforcement officials said they received a 911 call Nov. 28 from a juvenile on the run. According to police, she had escaped from a residence where she was being sex trafficked. Police said she was able to provide information that allowed police to start an investigation.

Police executed a search warrant on Nov. 29 at W2964 County Line Road in Manchester, Wisconsin, where they seized multiple items of evidence believed to be connected to the assault of the juvenile. The warrant also led to the arrest of six people who all lived in the home.

Amabilio Garcia-Rivera is suspected of trafficking the juvenile, the release said. Police believe all of the suspects are undocumented immigrants from Guatemala. According to the release, the suspects have made court appearances and are being held at the Green Lake County Correctional Facility on cash bonds varying from $20,000 to $50,000.

The incident is currently under investigation by the Green Lake County Sheriff’s Office and the Wisconsin Department of Justice’s Division of Criminal Investigations.

Once again our national networks have failed to pick up an important story because it doesn’t fit the anti-Trump narrative. (Some of the blogs, right-wing sites and independents did pick up the story.)

Sex trafficking is real and it is here in America.

Again, we have enough bad people in America already.

Is it too much to ask that we build the wall and slow the immigration crisis so that we can vet those who enter?

Some bad guys will make it through either way, but we would certainly catch more of them with a stricter process that was backed by a better border barrier.