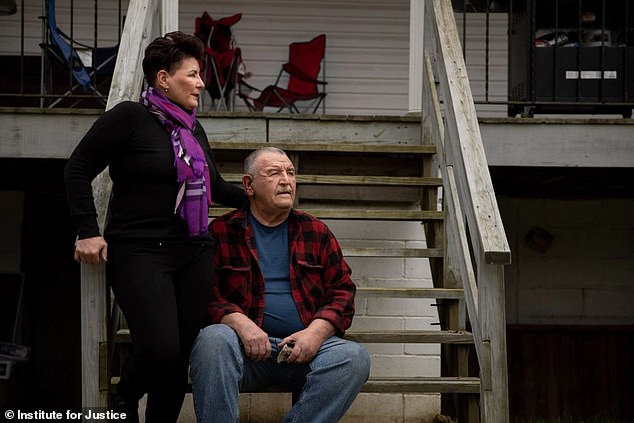 The TSA is criminal in so many ways.

When they aren’t groping someone, they are robbing them blind.

Seriously, if a criminal wants to smuggle over $80,000 and keep it hidden, they tend not to use a Tupperware container.

Same goes for the DEA.

Why would anyone be carrying money in a Tupperware container if they were dealing drugs?

This story is an embarrassment to both The TSA and DEA.

A Pennsylvania man who kept his entire life savings in a Tupperware container is suing the federal government after the money – $82,373 in cash – was seized at an airport after DEA agents deemed it ‘suspicious’.

Terrence Rolin, 79, and his daughter Rebecca Brown are the lead plaintiffs in a federal class action lawsuit filed Wednesday by the Institute for Justice which accuses the Drug Enforcement Administration and Transportation Security Administration of ‘treating American citizens like criminals’ by seizing large amounts of cash from airline passengers without evidence of an underlying crime.

Brown was visiting her father in Pittsburgh in August when he asked her to put his cash in a joint checking account.

She was flying back home to Boston to do that when TSA and DEA agents at Pittsburgh International Airport noticed the large sum of cash and began questioning her.

Brown said she had checked the TSA website beforehand to confirm that she could fly with that amount of money, and the site didn’t say that anything would prohibit her from doing so.

A DEA agent asked Brown to put her father on the phone so he could verify her story about where the cash came from, but Rolin, who is suffering mental decline, was unable to verify some of the details, she said.

‘He just handed me the phone and said: “Your stories don’t match. We’re seizing the cash,”‘ Brown recalled.

The DEA notified Brown that it was seeking to permanently forfeit Rolin’s life savings – leaving the retired railroad engineer unable to pay for dental work or repairs to his truck, his primary means of transportation.

‘My father and his parents worked hard for this money, and the government shouldn’t be able to reach into his pocket and take it,’ Brown said a press release announcing the lawsuit.

‘We did nothing wrong and haven’t been charged with any crime, yet the DEA is trying to take my father’s life savings. His savings should be returned right away, and the government should stop taking money from Americans who are doing something completely legal.’

The Institute for Justice, a Virginia-based public interest law firm, charges that Brown and Rolin’s predicament is not uncommon as the DEA has a history of abusing a practice called civil asset forfeiture, which allows authorities to seize cash and property suspected of being connected to criminal activity, even if the owner is not charged with a crime.

The lawsuit argues that the DEA’s apparent policy of seizing money from travelers without probable cause when it exceeds $5,000 violates their Fourth Amendment rights.

‘You don’t forfeit your constitutional rights when you try to board an airplane. It is time for TSA and federal law enforcement to stop seizing cash from travelers simply because the government considers certain amounts of cash “suspicious,”‘ Dan Alban, a senior attorney at the Institute for Justice, said in the press release.

‘We are trying to bring about institutional change and fix this terribly broken civil forfeiture system.’

The DEA and TSA seized money and, despite NO CRIMINAL CHARGES, are simply trying to keep it.

Unfortunately, it happens too often.

Civil Asset Forfeiture is just another name for legalized theft.

This is not justice.

This is government-sponsored theft!

Please pray that Terrence Rollin gets justice with his lawsuit.

I hope the judge awards damages that allows Rollin to retire in style.