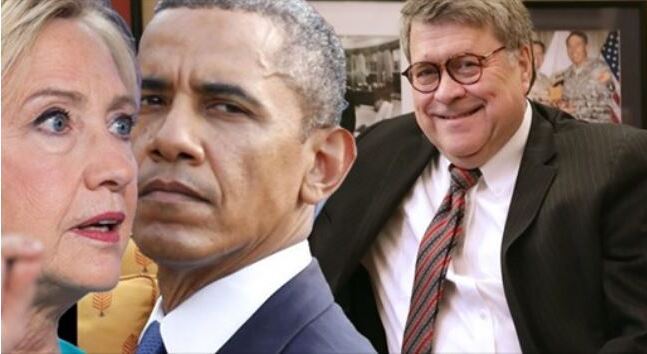 OPINION| Lawrence David| Those of us who actually believe in the Constitution and the rule of law are awaiting U.S. Attorney John Durham’s factual findings and grand jury indictments detailing and holding accountable those responsible for the gross abuse of surveillance laws on American citizens by Obama’s intelligence community.

In the meantime, it would serve us well to ignore the narrative engineers within the mainstream media, specifically from the New York Times (FBI) and the Washington Post (CIA) mouthpieces, who are working to lessen the impact of what is expected to be explosive revelations of political espionage arising from Durham’s work.

And, if Durham is able to secure indictments against a slew of high-ranking Obama-era intelligence officials within the FBI, DOJ, CIA, and State Department this may be the breaking of the dam that will engulf many other scandals of his administration.

These may include, but not be limited to, Uranium One, Skolkovo, Iran nuclearization, and collusion with the then corrupt Ukrainian government to help Hillary win the 2016 election.

This is the most likely reason for the rush to impeach President Trump on previously two unheard of charges and without citing so much as a single crime committed by the president.

Afterall, headlines are the most effective tool for influencing the most willfully ignorant amongst us.

Lest we succumb to the same media narratives, we should remember the statements of U.S. Attorney John Durham and U.S. Attorney General William Barr immediately after Inspector General Michael Horowitz released his report outlining FISA abuse on December 9th.

If either Durham or Barr planned on committing another cover up, their statements would not have been as contradictory. Or, they could have avoided commenting altogether.

…we advised the Inspector General that we do not agree with some of the report’s conclusions as to predication and how the FBI case was opened.”

This is the crux of the entire spygate hoax investigation. On April 10th, 2019 AG Barr, while providing Congressional testimony, said:

“I think it is my obligation.”

Based on the evidence collected to date… we do not agree with some of the report’s conclusion as to predication and how the FBI case was opened.”

Eight months later, following the release of Horowitz’s last report, Barr was more convinced than ever that the FBI had manufacture evidence to spy, first on candidate Trump and then on President Trump.

“The Inspector General’s report now makes clear that the FBI launched an intrusive investigation of a U.S. presidential campaign on the thinnest of suspicions that, in my view, were insufficient to justify the steps taken. It is also clear that, from its inception, the evidence produced by the investigation was constantly exculpatory…

… The malfeasance and misfeasance detailed in the Inspector General’s report reflects a clear abuse of the FISA process.”

Steele admitted the “evidence” he used to construct his dossier came from a “Primary Sub-source.” The FBI field agent who questioned that sub-source came away convinced that “the tenor of Steele’s reports was far more “conclusive” than was justified.”

(Page 188 of the Inspector General Report)

In fact, the evidence was so thin that the FBI should have provided a defensive briefing to the Trump campaign to warn them that an effort to subvert their campaign was in effect.

Instead, the FBI increasingly told the FISC more lies. Where they made seven misrepresentations, and omissions of exculpatory evidence to the FISC initially, by the fourth renewal application that number had grown to 17.

The FBI was intent on framing Donald Trump using a dossier paid for by Obama allies from the DNC and the Clinton campaign.

The left wing narrative engineers tell us that the FBI “relied” on the dossier compiled by Chirstopher Steele. The more accurate way of explaining the FBI’s actions is that they promoted the lies contained in Steele’s dossier to deceive the FISA Court… four separate times.

One America News Network (OAN) has produced an exceptional documentary that explains the FISA abuse that airs tomorrow (Sunday) from 11-Noon (Eastern time.)

Former MSM journalist and producer for Channel 7 in Washington DC (1979 – 1989), John Spiropoulos spent a month combing through every detail within the report.

Spiropoulos presents the key details with video from IG Michael Horowitz’s congressional testimony and selected Senators in a cogent manner that gives the viewer a complete picture of what can be a confusing storyline due to mainstream media disinformation.

Having watched the entire documentary, I highly recommend watching it to understand the depth of the corruption that the Marxist narrative engineers are working to hide.