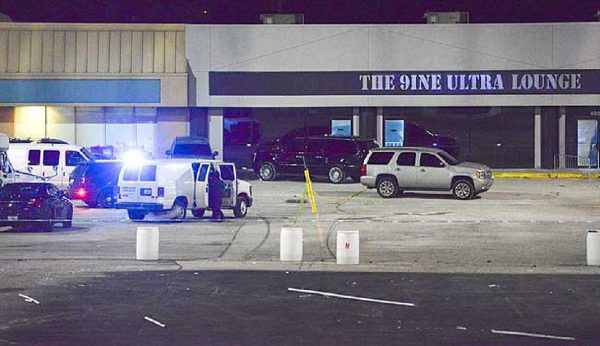 Races reversed, the biggest story in America. Right? You know what happens when a black individual engages in a mass shooting? Silence from the corporate media. They can’t be promoting racial stereotypes, can they?

Confirming them wouldn’t be productive, right?

No narrative (white gun owner, with obviously racist leanings, engaging in a mass shooting to justify his small sexual organ) to advance…

Only hours before the day tens of thousands of white people would peacefully march with AR-15s and other semi-automatic weapons in Richmond, Virginia, defending their right to bear arms (defending the 2nd Amendment in the face of tyranny), a black criminal in Missouri would once again remind the nation why the 2nd Amendment should be null and void for blacks [Police identify gunman in mass shooting outside Kansas City bar, KCTV5.com, January 20, 2020]:

The shooter is identified as 29-year-old Jahron Swift
of Kansas City, Missouri. He has a record meaning he shouldn’t have had a gun, but he has several.

Police said that an armed private security guard at the club shot and killed Swift about 11:30 p.m. just outside of 9ine Ultra Lounge located in the 4800 block of Noland Road.

The victim is 25-year-old Raeven A. Parks of Kansas City.

At least three of the 15 injured victims are in critical condition.

Police say they have not yet interviewed all of the victims and do not yet know whether all were injured by gunfire.

Investigators recovered multiple firearms at the scene. It appears the suspect and the security guard were the only ones who fired shots, police said.

KCTV5 News spoke to a security guard who was at the nightclub, he says the gunman got into a fight with a few guys and was denied entry. That was when the gunman went to his car to get the gun he then used to shoot into the crowd.

“One second everyone was just sitting there trying to get into the club. I believe it was at capacity in there, honestly. Then next thing you know, boom, boom, boom. About five shots rang out. People start falling, scattering,” Larry Phillips, who lives near the nightclub, said.

Police also would like to see any possible cell phone videos that were taken at the club that night around the time of the shooting.

29-year-old Jahron Swift, a black criminal, shouldn’t have even possessed a firearm. But he did. And he shot 16 people, killing one. Gun control is nothing more than an effort by the elite to disarm white people across America, who are starting to notice the dispossession of whites via mass 3rd world immigration means the end of their rights.

Mr. Swift wasn’t legally allowed to own a gun, but he did anyway. And he shot 16 people with it, killing one.

Gun control was never about targeting black gangbangers who perform almost all of the acts of gun violence across not just Kansas City, or Missouri, or the United States; no, it’s about disarming law-abiding white Americans.