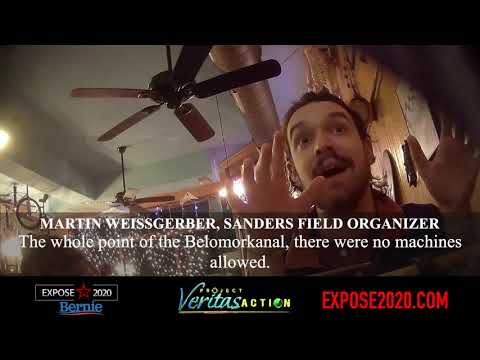 Are you still feelin’ the Bern?

Project Veritas released a video Tuesday with yet another Bernie staffer calling for violence.

How does Bernie find such idiots to work on his campaign?

My guess is that they flock to him.

Martin Weissgerber was recorded in the sting drinking craft beer and saying, “I’ll straight up get armed … I’m ready for the f—ing revolution.”

He proudly proclaimed his support for violent class warfare and said, “what will help is when we send all of the Republicans to the re-education camps.” He praised gulags and said that the “Soviet Union was one of the most progressive places” in history for women’s rights.

The Post Millennial has independently verified that Weissgerber has expressed disdain for police officers, Israel, women, and more on social media—all the while enjoying an opulent lifestyle where he sips champagne, goes sailing and holidaying in Europe.

In addition to his work on the Sanders campaign, Weissgerber also has a fledgling career as a Soundcloud rapper, under the name King Manic.

This is the second Sanders staffer exposed by Project Veritas in their “#Expose2020” project. Last week, video showed Kyle Jurek similarly speaking favourably of Soviet gulags and urging similar punishments in the U.S. for counter-revolutionaries. He also expressed support for antifa extremism and advocated for political violence on the street. The Sanders campaign has not responded to the videos.

It is really no shock that Bernie’s campaign hires these tools, IF you have been paying attention to what Bernie is saying.

Why wouldn’t he hire a bunch of thugs who are on the same wavelength?

I don’t know about you, but if Bernie wins I fear that I will be part of the population that gets reduced.

This is a violent man trapped in a harmless Grandpa’s body.