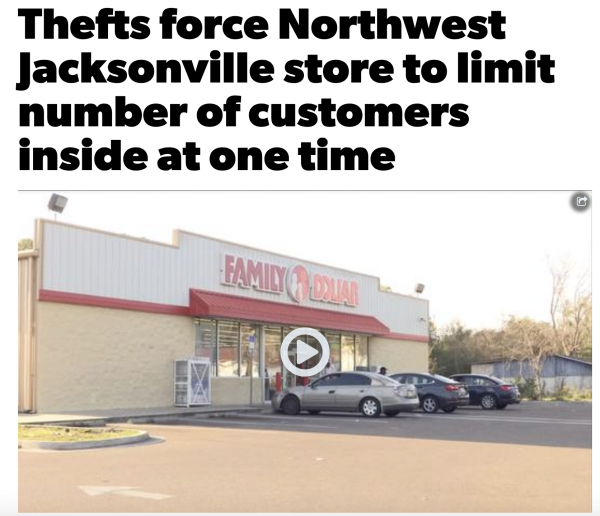 Previously on SBPDL: Because of High Levels of Theft, Kroger in 92% Black Community Near Atlanta Under Fire for Enclosing Aisles Within the Store

Why do food deserts exist? The answer is so obvious, but one few dare give in the current year.

Zip code 32209 is found in Jacksonville, Florida. Black residents make up 82 percent of the population in this zip code.

What does social capital look like in a 98.8 percent non-white (82% black community) community? This…[Thefts force Northwest Jacksonville store to limit number of customers inside at one time, News4Jax.com, January 20, 2020]:

Theft at one Northwest Jacksonville store has become such a common occurrence that employees said they have gone as far as to limit the number of people who can enter the business at one time.

Employees at the Family Dollar on Moncrief Road near West 45th Street told News4Jax on Monday that they’ve restored to locking the door once five people are in the store at the same time so they can do their jobs while monitoring the aisles.

People started talking about the policy after a photo was shared to the “Only in Duval” group on Facebook. It shows a sign posted on the store’s window, reading, “Due to theft only 5 people at a time.”

Although store employees were not allowed to make comments on camera, customers familiar with the frequent thefts explained why store management started the policy that limits the number of people inside the building during certain times of the day.

“It’s really geared toward the students who are getting out of school and when they come to the store after school, they are taking things out of the store and not paying,” said Jacksonville resident Janet Jordan. “There are also adults doing the same thing.”

News4Jax obtained at least a dozen police pamphlets that go with theft reports from the last 20 days. But theft is not the only crime that has affected the Northwest Jacksonville area.

Within the last four weeks, according to a Jacksonville Sheriff’s Office crime map that was modified to reflect crime reported within a mile radius of the store, there have been 12 thefts, 11 assault and battery cases, one snatch-and-run robbery and five burglaries.

Shirley Blair, who has lived in Jacksonville her entire life, said it didn’t use to be like this.

“It’s so bad, people don’t even want to sit on their porch anymore,” Blair said.

She said poverty and drugs are fueling the crime and leaving many without hope of a better future.

“They’re going to do anything they can to get what they want,” Blair said. “And that’s kind of sad.”

The closest high school to this Family Dollar has an enrollment that is 95 percent black.

At the end of the day, publicly traded companies must answer to balance sheets, income statements and shareholders. Family Dollar is a publicly traded company, and this store located in a 98.8% non-white area of Jacksonville is losing money with thievery taking its toll on the patience of management. Concerns for the food desert mean little when shareholders see earning per share drop.

The Visible Black Hand of Economics is a foolproof concept, capable to withstand any peer review and providing irrefutable evidence to how and why communities flourish or flounder in the United States of America.

The blacker a community in the USA, the less likely social capital will flourish.

In laymen terms: a food desert is what occurs when you regress to the black mean.