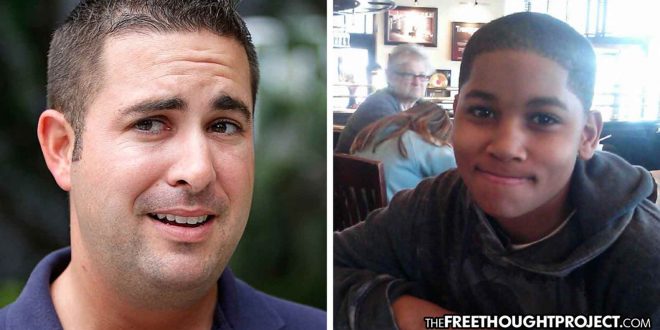 Miami, FL — In December of 2015, a “hero” police officer made headlines when he took to his Twitter account and declared that Tamir Rice, a 12-year-old boy who was killed by Cleveland police for playing with a toy gun, was a thug. Since then, as officer Javier Ortiz was the president of Miami’s police union, the cop became famous for defending officers who shot and killed unarmed black people. Now, after years of calling dead black people thugs and defending the cops that killed them, Ortiz himself claims he is black. You cannot make this stuff up.

For perspective, here’s a little history on Ortiz, courtesy of Slate:

Ortiz was president of the city’s police union from 2011 to 2017. As head of the union, Ortiz, a vocal Trump supporter, often spoke out in defense of police officers who shot unarmed black people, according to the New Times, which described Ortiz as “ the most controversial and well-known cop in Miami.” He once called 12-year-old Tamir Rice a “thug” and argued that other prominent killings in the news were “justified.” He was criticized for editing an image of a black suspect to have red demonic eyes. He tried to start a boycott of Beyoncé after she referenced the Black Panthers in a Super Bowl performance. He directed his supporters to a “We Support Darren Wilson” Facebook page that spread false news and racist discussions about the killing of Michael Brown. He has been accused twice of falsely arresting black NFL players, and he has been accused multiple times of racial profiling.

Now, after becoming famous for slandering dead black people and stomping on their rights and graves, Ortiz was caught claiming he was a black man on the officer’s promotional board. During a City of Miami commission meeting last week, Ortiz stood in front of commissioners and defended the claim that he is black. He then referred to black people as “Negroes.”

“Well, I learned that there are people in my family that are mixed and that are black,” Ortiz said. When a commissioner protested talk of “the degree of blackness,” Ortiz was quick to clarify that he wasn’t claiming equal blackness.

“Oh, no, you’re blacker than me—that’s obvious,” Ortiz said to one commissioner. “And if you know anything about the one-drop rule, which started in the 20th Century, which is what identifies and defines what a black male is, or a Negro, you would know that if you have one drop of black in you, you’re considered black.”

When the video above began going viral, Ortiz tweeted: “This isn’t news. People love making stereotypes. It’s actually refreshing to be who you are, like an American.” He then blamed the press for focusing on his specific race. He asked one reporter to “change your headline to say the truth from the get go: ‘BIGGEST Number of Black Staff Members Promoted in MPD history since 1896.’”

It’s s story that reads like it is right out of the Onion—but unfortunately, it’s true.

The Miami New Times compiled a list of all the illegal, racist and questionable misdeeds this newly declared “black man” has committed over the years. It is extensive.

1. Doxing a private woman for no reason

5. Drawing a demon’s face on a mugshot of a black person

6. Implying the Assistant Chief of Police didn’t salute the flag because she was “Muslim”

7. Saying an 18-year-old graffiti artist whom cops Tasered to death somehow deserved it

8. Writing a false report after a group of cops Tasered an innocent man at Ultra Music Festival

9. Storming into a City Commission meeting with a group of fellow cops in protest, thereby terrifying city officials, who feared it was some sort of armed coup. (With zero hint of self-awareness, he later called nonviolent anti-Trump protesters crybabies.)

10. Smearing a woman who posted a video of police misconduct

11. Starting a “We Support Darren Wilson” Facebook page, only for that page to become a vehicle for racist bile

12. And, of course, picking a fight with Beyoncé for referencing the Black Panthers at the Super Bowl.

Ortiz has also been on TFTP’s radar since 2016 when he doxxed an innocent woman who posted evidence of his harassment and lawbreaking. In late January 2016, Claudia Castillo pulled over Ortiz and accused him of speeding. She filmed the encounter and posted it to YouTube, where it went viral.

In response to being caught breaking the law, Ortiz, the former leader of the Miami FOP, used his police powers to access and post Castillo’s personal information and photo online.

According to the Miami Herald‘s repor, Castillo received so many calls at work that she became concerned about her job security. “They sent me home yesterday,” the project manager said.

For the gross violation he committed by posting all the woman’s private information online, Ortiz received a paid vacation and was never fired.

Now, this infamous cop has sparked a whole new wave of backlash by claiming to be black. According to the Miami Times, city officials are discussing Ortiz’s more recent comments and the possibility of his firing. The black officers’ union also demanded that Ortiz be punished and that the police chief either resign or address the racism in his department.