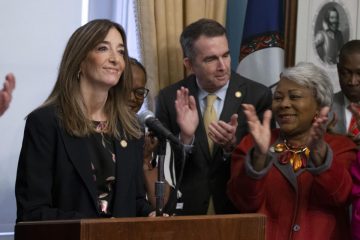 King Northam and his palace court are getting nervous

Boy those VA Dems don’t know when to stop digging that hole! Now they want a law protecting state government officials from citizen “threats and harassment”. How subjective is that?.

King Northam’s Wall—Afraid of His Subjects!

House Bill 1627 “provides that certain crimes relating to threats and harassment may be prosecuted in the City of Richmond if the victim is the Governor, Governor-elect, Lieutenant Governor, Lieutenant Governor-elect, Attorney General, or Attorney General-elect, a member or employee of the General Assembly, a justice of the Supreme Court of Virginia, or a judge of the Court of Appeals of Virginia.”

Florida: Your Republican State Senators Just Sold You Out On Gun Rights

Here is their definition of “threats or harassment”:

“If any person, with the intent to coerce, intimidate, or harass any person, shall use a computer or computer network to communicate obscene, vulgar, profane, lewd, lascivious, or indecent language, or make any suggestion or proposal of an obscene nature, or threaten any illegal or immoral act, he is guilty of a Class 1 misdemeanor,” the legislation reads.

THOUSANDS and THOUSANDS of Guns at Virginia Rally and Not a Single Person Shot. Meanwhile in Chicago

King Blackface Northam and his liberal bed-fellows realize that public opinion has turned sharply against them. The best way to stop that is to silence the peasants under threat of imprisonment or fines. Anyone else believe this will just lead to more public criticism?

Surprise! Those People Lecturing You on Climate and Government are H.S. Drop-Outs

Tina Freitas, wife of Republican Delegate Nick Freitas, posted the following on Facebook. The post has been removed by???

For the full scoop go to Big League Politics