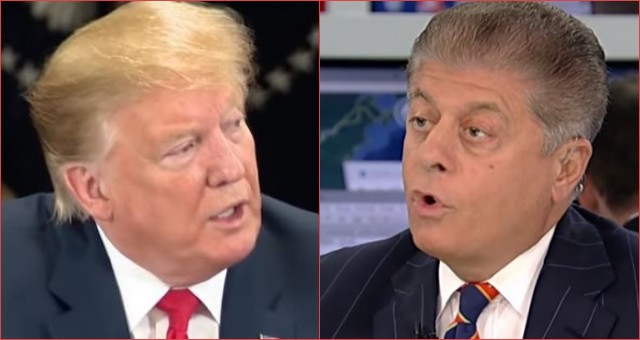 (TNS) There is no better example of Fox News’ transition from an opposition news network into just another Left-wing mainstream hack show than former Judge Andrew Napolitano.

In an op-ed published Thursday, Napolitano claimed that there is “ample and uncontradicted” evidence that President Donald Trump should be impeached and removed from office.

“What is required for removal of the president? A demonstration of presidential commission of high crimes and misdemeanors, of which in Trump’s case the evidence is ample and uncontradicted,” he wrote.

“However, this use of the word ‘crimes’ does not refer to violations of federal criminal statutes. It refers to behavior that is so destructive of the constitutional order that it is the moral equivalent of statutory crimes,” the judge wrote.

Napolitano then noted that there are “valid, lawful, constitutional arguments for Trump’s impeachment that he ought to take seriously.”

He also chided Republican senators who have said they are ready to acquit the president — which is based on their perception that the House never had any legitimate evidence to impeach Trump in the first place.

“Whoever may have whispered that into his ear is unworthy of sitting as a juror and has violated the oath of ‘impartial justice’ and fidelity to the Constitution and the law,” Napolitano wrote, apparently tone deaf to the fact that Democratic senators nearly to a person had already predetermined they would vote for removal.

Napolitano then goes on to cite a finding by the Government Accountability Office (GAO) earlier this month in which the ‘non-partisan’ entity determined that Trump had violated U.S. law when he temporarily withheld military aid from Ukraine — the centerpiece of Democrats’ impeachment.

“The Government Accountability Office —  a nonpartisan entity in the federal government that monitors how the feds spend tax revenue — has concluded that Trump’s request for a favor was a violation of law because only Congress can impose conditions on government expenditures. So, when the president did that, he usurped Congress’ role and acted unlawfully,” Napolitano wrote.

Like most other mainstream media, however, Napolitano has conveniently left out the fact that right after the GAO released its well-timed legal finding — on the eve of the impeachment trial — the Office of Management and Budget (OMB), which actually disperses foreign aid, came out with an alternate legal opinion stating clearly that the president did not violate the law.

As reported by Breitbart News:

In the memo to GAO, which works for Congress, the OMB begins by explaining that it often holds up funding to federal agencies in the regular course of business under its apportionment authority, often for reasons as mundane as making sure funding is being spent efficiently.

However, there are different methods of holding up funds. One is “deferral,” which is still subject to the provisions of the Impoundment Control Act, which requires the president to inform Congress.

Another way funds can be withheld is “programmatic delay,” when the president withholds funds as he’s developing policies surrounding the funds. In the case of a “deferral,” that runs counter to Congress’ instructions and intent, a programmatic delay actually works in favor of congressional intent. The OMB notes further that both methods have long and legitimate histories.

In its memo to the GAO, the OMB explained that the Ukraine hold of a few months was a “programmatic delay.”

“It was OMB’s understanding that a brief period was needed, prior to the funds expiring, to engage in a policy process regarding those funds,” the memo stated. “OMB took appropriate action, in light of a pending policy process, to ensure that funds were not obligated prematurely in a manner that could conflict with the President’s foreign policy.”

In a footnote, the OMB further stated that at times the Executive Branch has held up funding past the statutory deadline at the request of Congress.

“OMB is aware of instances in which Members of Congress demanded that agencies withhold funds for months— and even years—beyond the period required by statute for reasons wholly unrelated to the purpose of the appropriation,” the agency said.

As for Napolitano, the increase in his criticism of Trump seems to have coincided with the president’s refusal to appoint him to the Supreme Court.