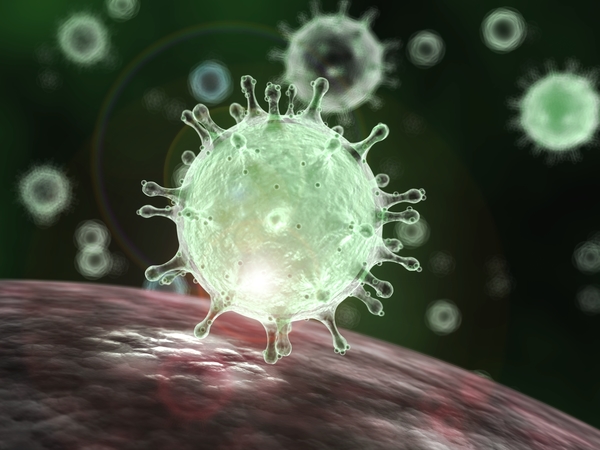 Before the infestation of Fake News (or should I call it an outbreak?), you could be assured that simply tuning into any newscast or reading any newspaper you could get unbiased FACTS. You could know what is happening in the world, without question.

News reporters, journalists, writers, editors, their producers and bosses all prided themselves on getting the story right, having credible sources, leaving emotion out of their news, and most importantly, getting the FACTS STRAIGHT.

Nowadays that is essentially impossible to find anymore.

Almost every news organization has an agenda now. They have buzzwords such as “climate change” that they need to pack into every story. They insist on 72 genders. And in the next breath they try to convince you that women are just as strong, capable and equal to men and at the same time, don’t make as much as men. Did they forget about those other 70 genders already?

Most of the time, this is just a nuisance to be avoided. A smart person can extract enough useful information from the hyped up stories and fear mongering to at least know what is going on in the world. Read between the lines. If you ignore the climate change BS, you can see that there are fires in Australia. Ignore the made up charges against POTUS and you can figure out that he is being impeached.

This doesn’t become a real problem, until suddenly important events are happening in the world. Events where detailed facts become paramount to the story.

In the scope of important news… Pandemics are that type of important event, where you need facts. You don’t need hype, or emotion, and definitely not fake news.

Unfortunately, for you, for me, for everyone, there is a Pandemic spreading as you read this. 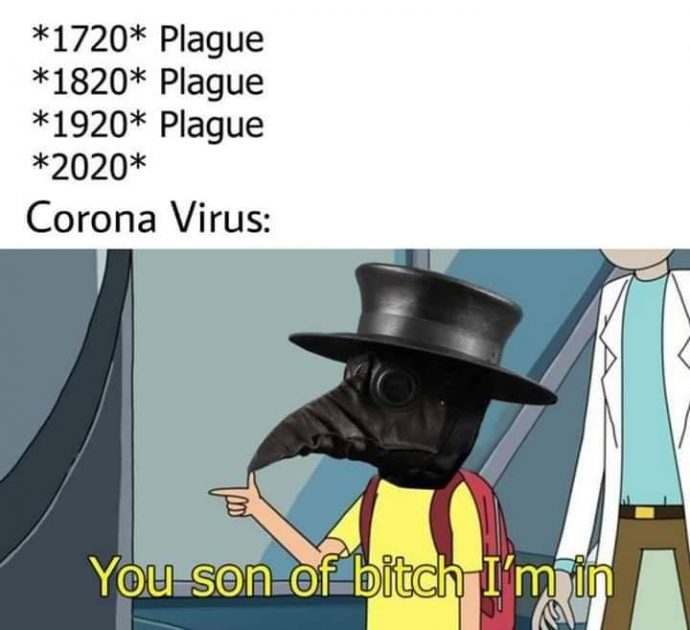 It doesn’t help that there appears to be a 100 year cycle of pandemics. The 1720 Great Plague of Marseille, the 1820 Cholera Outbreak and the 1920 Bubonic Plague.

Tomorrow, more people will be dead. However, nobody is going to tell you how many are ACTUALLY dead. You and I will have NO CONCEPT of how bad this thing is, until it is too late. The news we will receive will be filtered through governments first, many of which have a bad reputation for delivering facts.

These carefully chosen ‘facts’ are then passed on to ‘trusted’ news reporters. They get passed on to their cautious editors who in turn hand them over to producers concerned about the bottom line. Those producers will curate the words we finally hear. A dangerous game of Post Office. The final details far removed from the original facts. 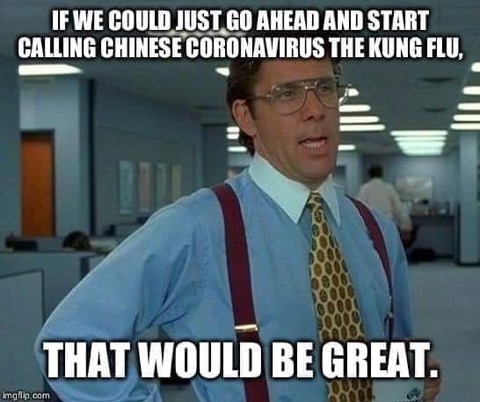 The Wuhan, China Coronavirus (2019-nCoV) is dangerous. Yet it is difficult to tell how dangerous. The first words spoken about it were, “Don’t worry. It is not easily spread. There’s no human to human transmission.”

‘Coronaviruses are a family of viruses that infect a wide range of different species including humans, cattle, pigs, chickens, dogs, cats and wild animals. 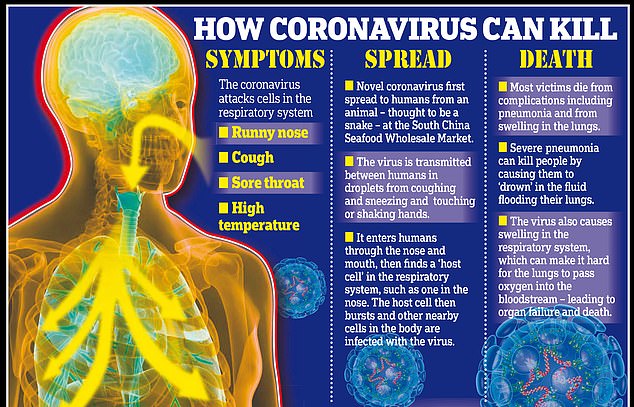 It was only a week before that “It’s not easily spread” became, “Watch out, it’s potentially spread by coughing”.

That changed a few days later to, “Chinese doctor Wang Guangfa, Beijing’s Peking University First Hospital, fears he may have contracted the SARS-like infection because he wasn’t wearing protective goggles”

So what they REALLY mean to say is… it is EASILY transmissible via ANY bodily fluids and through the mucous membranes. In other words, HIGHLY CONTAGIOUS and deadly.

To top that off, doctors have no idea how long it lasts outside of a host/body. They do know it is days. How many is important. Will they tell us when or if they find that answer?

A virus that lasts for days on surfaces, spread via any bodily fluid, and transmitted through ANY mucous membrane, essentially means, a Chinese tourist sneezes in their hand, or (I won’t go into details) has bad bathroom hygiene and touches a handrail, elevator button, grocery store self-checkout kiosk, or doorknob, you get the picture… ANYTHING that you will end up touching, and then YOU rub your itchy eyes, or a runny nose, or worse your CHILD’S runny nose and suddenly you are another Coronavirus victim.

Can We REALLY Trust the World Health Organization? Read This! – The Basics of a Staged Bioterror Attack

Tedros Adhanom Ghebreyesus, is not a disease, he is the Director-General of the World Health Organization since 2017 and he said yesterday morning:

I am not declaring the new #coronavirus outbreak a public health emergency of international concern today. The Emergency Committee was divided over whether the outbreak represents a PHEIC. This is an emergency in China, but it has not yet become a global health emergency.” 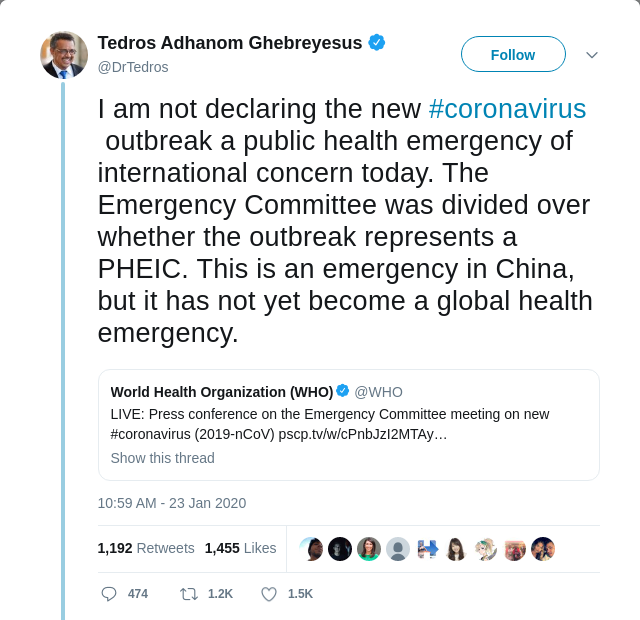 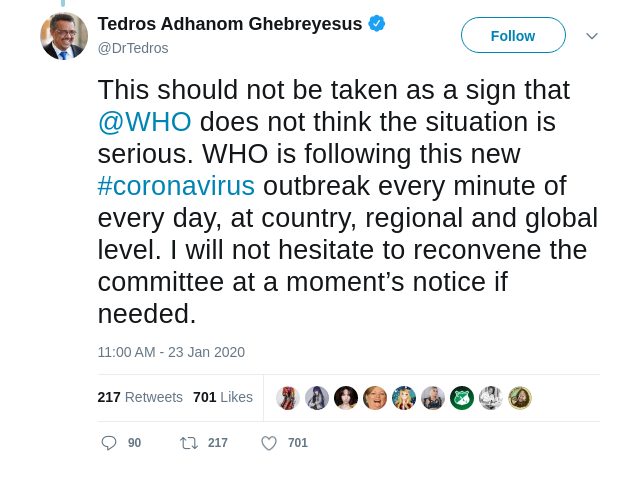 Someone is lying to you.

It IS happening Internationally. It IS affecting Public Health… and people are DYING. Which I personally consider an Emergency, and it has me Concerned. I guess Tedros and I have different definitions of ALL of those words.

Oh sure, it’s not a PHEIC “Public Health Emergency of International Concern”. Don’t worry at all about the Chinese tourists that defecate on our sidewalks. Those EXTREMELY hygienic people are of NO CONCERN AT ALL when it involves a HIGHLY CONTAGIOUS, EASILY SPREAD VIRUS THAT TAKES DAYS TO DIE OUTSIDE THE BODY, AND EASILY LIVES ON HARD SURFACES.

This isn’t an Emergency of International Concern however, “China cancels its Lunar New Year celebrations, locks down FOURTEEN cities, shuts part of the Great Wall and Shanghai Disneyland in desperate bid to contain killer coronavirus”

The Lunar New Year begins Saturday, January 25 and it is the year of the rat. Irony is not lost since mice and rats are used in the epidemiological field.

China cancelled Chinese New Year, THE biggest celebration and tourist travel time in China. They closed an entire city of 21.5 Million plus 13 other cities. Over 56 Million people told not to travel outside of their communities. For something that’s “not a concern”.

China shut down the Great Wall, and other tourist attractions, which is economically unconscionable when only 26 people have died.

You might also ask, why are the dead being left on the floor in the hallways of hospitals? Only 26 dead? 41 Dead? What’s the TRUE count? Don’t Chinese hospitals have morgues? Wouldn’t the floor of a MORGUE be a better place to leave dead people? Unless the morgue is already full? Someone is lying to you.

Now… I don’t know how YOU run YOUR COUNTRY… but if a simple flu-like virus was out there, and it wasn’t that much of a concern, I wouldn’t be rushing to build a 1000-bed hospital in a week.

All of the misinformation makes me ask myself… Did they lie in the beginning to allow it to become widespread?A theory that seems possible, “Colombian Man in Wuhan: We’ve Known of Deadly Virus for a Month”

Are They Hiding Something? Read More – A ‘High-Level Exercise’ Conducted 3 Months Ago Showed That A Coronavirus Pandemic Could Kill 65 Million People

It might be naivety, but I don’t think this is a deep state op. However, if you fear Globalism, and the One-World-Government, having a Global plague is a troubling issue. Nothing like thousands of people dying to get the feeble and weak minded to beg for an international group to take charge. Especially if you don’t have respect for the President of your Country.

A Deep State Covert Action? Read This! – Is the New “Deadly China Virus” a Covert Operation?

I had a friend claim that this was a false flag to counter the impeachment trial… but that’s like lighting a small firecracker with a flamethrower. The impeachment trial isn’t even being followed by anyone except diehard TDS sufferers. Nobody cares about it. And it’s not like China is really interested in killing off Chinese citizens just for us.

The only thing for sure about this Pandemic is… we will not know the entire truth.

That means you need to look out for yourself. Limit travel. It’s winter, wear gloves. Avoid close contact with others. Avoid tourists. Literally, avoid coughing people like the plague. Wash your hands frequently.

Remember, a virus is not magic, it NEEDS a route. Do NOT give it a route. Don’t touch your eyes, unless you remember the last time you washed your hands and can guarantee you didn’t touch anything infected since. Don’t rub your nose. Do NOT touch ANY of your Mucous Membranes with potentially infected hands or other body parts.

Same goes for your loved ones. Kids are especially vulnerable, from a transmission standpoint, and from what the virus does to young immune systems. Get them used to alcohol based hand sanitizers. Old people are vulnerable because of old immune systems, and often lung issues, make sure they are being cared for.

Experts say the difficulty of containing the Coronavirus is that so many patients have mild, cold-like symptoms and don’t realize they have the infection – but it can quickly turn deadly

Watch out for symptoms. Fever, Coughing, Headache, Pink Eye, Heart Palpitations, Muscle Aches, and Digestive Issues. If you start to feel unwell, self-quarantine. I know it can be a financial burden, but it might be time for a trip to your family doctor or an Urgent Care, if you have two or more symptoms and are at risk for having contracted something. If you go… remember, others may be infected, take extra precautions.

Well that escalated quickly. Death toll up to 56. Thirty more than the official number when I wrote this 24 hours ago. 15 more than the 41 that was rumored at the time.

On January 9, the World Health Organization notified the public of a flu-like outbreak in China: a cluster of pneumonia cases had been reported in Wuhan, possibly from vendors’ exposure to live animals at the Huanan Seafood Market. The US Centers for Disease Control and Prevention had gotten the word out a few days earlier, on January 6. But a Canadian health monitoring platform had beaten them both to the punch, sending word of the outbreak to its customers on December 31.

BlueDot uses an AI-driven algorithm that scours foreign-language news reports, animal and plant disease networks, and official proclamations to give its clients advance warning to avoid danger zones like Wuhan.