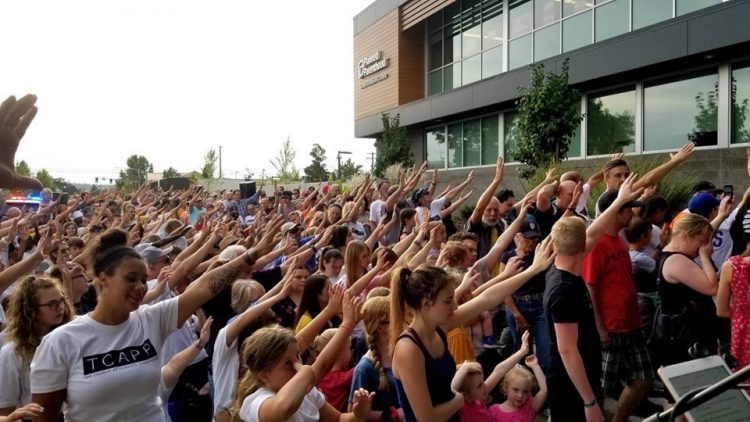 “…and upon this rock I will build my church; and the gates of hell shall not prevail against it.” -Matthew 16:18

Sometimes, you just run across stories where the Church is doing exactly what it’s supposed to be doing and it excites you to see the power of it.  Pastor Ken Peters from a small church in Spokane, Washington was spurred on by a visiting preacher and given encouragement by the above verse that activated him and many others to start a church right on the doorstep of Planned Parenthood, and the turnout has been nothing short of incredible.

“The Church at Planned Parenthood” (TCAPP), a monthly gathering of Christians from various churches to worship God, boldly preach the Gospel message, and to spend time in corporate prayer repenting for this nation and the church’s role in the abortion holocaust…all while standing together outside a Planned Parenthood clinic, according to My Faith Votes.

In an interview with My Faith Votes’ Media Director Megan West, Peters said:

So Rev. Rusty Thomas (Operation Save America) miraculously came to our church to stir us up about the issues of life and the murder of the unborn that’s going on in our nation. And he was preaching on when Jesus said: “I will build my church and the gates of hell will not prevail against it.” And I could tell this sermon was to activate, to get the church doing something. So he says, if you have any worship leaders, have them go out to Planned Parenthood with a guitar and just start worshipping. If you have any intercessors, just get them out there praying. If you have any preachers, get them out there and just preach. And I thought you know what? That sounds like church: preaching, worship, and prayer. I really felt like the Lord spoke to me and said: “don’t you dare plant another regular church until your next church campus is the church at Planned Parenthood, an outdoor church.” I got up after the sermon, all fired up, and I announced to the congregation that our next church is going to be a church at Planned Parenthood!

According to Peters, his wife looked at him like he was crazy and even Thomas was stunned at the simple yet profound idea.

Peters said that the church wanted to see if he would follow through with his word and start meeting at Planned Parenthood.

,” where people just keep coming in and giving and giving. I literally couldn’t believe we were at Planned Parenthood and people kept coming from every direction. The church was so gracious and precious and they just followed their crazy leader and did something in response.

Additionally, this is not your typical Church meeting either.  It’s outdoors and there are plenty of things to distract people.  Pastor Peters describes the atmosphere:

It’s electric! You can literally feel the spiritual warfare when you first get there. When it gets close to the time to start, people are coming in from everywhere because you have to park in the surrounding neighborhoods and walk in because Planned Parenthood is not going to let you park in their parking lot, they don’t like you being there. But it’s what the church should look like, people coming in from every direction and converging on this one spot right by Planned Parenthood. When you show up, the police are there with 5-8 police cars with lights flashing. There have been barricades put up on both sides because we’ve attracted a number of protestors, primarily from the LGBTQ community. They are very angry folks so the police separate them with barricades. They are on one side of the street and we’re on the other. There are people screaming at you. It’s like no other church service you’ve been to in your life.

Instead of being there to protest, Peters says that they are there to simply call upon the Lord.

“Our messaging is very important to us,” he said.  “We are very strong on the fact that we are not a protest. We are simply having church. We do not engage with the protestors, we’re not there to speak with them. We are there to call upon the Lord. It’s spiritual warfare, not warfare of the flesh.”

He added, “Our motto is ‘this is how we fight our battles,’ like the song. So we ask people not to bring signs. We don’t want to look like a protest. The secular press tries to label us a protest but we are not a protest. We are having church, we’re a church plant, planted at the gates of hell, believing that the gates of hell will not prevail.”

But what about the message?  Are there just “pro-life” messages when the people gather?

It’s naturally going to be more focused on the life issue because you’re right next to their building. We don’t tell the preachers what to preach. If they want to preach the Gospel, oftentimes that’s just what they do. The whole idea is to do what we do on a Sunday morning. Let’s take what we’re good at the assembly of the saints and let’s take it outside and have outdoor church right there at a Planned Parenthood. You don’t need to say why. A picture is worth a thousand words when you have Christians out there worshipping God. You don’t need to say one thing about life, but everyone knows why you are there.

From this one assembly, other locations are now replicating the model that Pastor Peters has established.

My vision is that the bushel, or the basket depending on what bible verse you are reading, is taken off the church. We’re sitting in our safe spaces under our roofs, but Jesus said you are the light of the world, a city on a hill. Either keep your light under a bushel or let your light shine before men that they might see your good works and glorify your Father in heaven. So my vision is that the bushel would be taken off the church of Jesus Christ and the church would be worshipping outdoors all across the land in front of Planned Parenthood or close to any abortion mill because Jesus loves kids and said whoever receives a child in my name receives me. Almost all revival has happened outdoors. So my ultimate goal is to see revival and see the church activate.

When it comes to the church’s silence on abortion, as well as other issues in society, Peters said, “I think it’s become a political issue and it’s become a political football. Churches want to reach everyone. But they’ve let a good motive destroy their prophetic voice. And in an attempt to reach people, they’ve stayed away from issues that might chase people away. Instead of realizing that Christ himself is the truth and we don’t need to be afraid of the truth because that is Christ himself. They’ve stayed away from these issues because it’s controversial, they’ve become Republican or Democrat issues.”

“What we have to do is ignore the fact that it has become a political football because these are biblical issues,” he added.  “John the Baptist leapt for joy in the womb of Elisabeth when Jesus was in the womb of Mary and came into the room. There’s activity in the womb itself. We as the church need to recognize these are biblical issues. We’ve been given this great country, it’s “we the people,” so we have to be stewards of this nation as well. We need to be a prophetic voice in the wilderness. If people want Jesus, they’re going to want the truth too. I think we can speak truth boldly and not hatefully. The Devil, he’s a deceiver, and he has the churched duped into silence and he likes it that way.”

So, what has been the biggest cost to the church?

“The biggest cost has been the slander of our character,” he said.  “A year ago I was just a pastor with a cute family and cute church and a cute Christian school. Now I found out in the last year that even though I haven’t changed anything of my beliefs, or my family or anything, I’m now labeled a hateful, bigot, extremist that is a danger to society. The left is going to try to do everything they can to make you an extremist. My name is now mentioned multiple times at city council meetings as dangerous and hateful. The LGBTQ community and drag queen folk in Spokane have come to our home church and stood outside our doors protesting, screaming at our church people as they come and go. One time I had to have our security team help get me to my car. My daughter has had nightmares because people are holding up hangers outside our car windows. So that’s the cost, your reputation. The left bullies with a fear of a destroyed reputation. So you’ve got to be ready for that.”

And what has been the fruit of his endeavors?

“The good part of it is I’m talking with My Faith Votes right now,” he told My Faith Votes.  “I wasn’t doing that two years ago! I’ve always had a passion for our nation and revival in the church. So the Lord has kind of thrust me out and given me a voice which is what you want when you’re a preacher and in a Bible college. You want the Lord to use you mightily, you want to make a difference. In the last year and a half, all this wasn’t planned, I never dreamed this would happen. I thought twenty people were going to show up at the first outdoor church service but then you end up now with six hundred and fifty people coming and on the front page of the newspaper! The Lord just gives you an opportunity to do something you never dreamed of and that is to make a difference. That’s worth whatever opposition I go through. I never thought me making a difference would be starting a church at Planned Parenthood, but the Lord works in mysterious ways. He’s given me a voice, a prophetic voice in this nation through the craziest yet simplest of ideas. We’ve heard many, many stories of the blessing of The Church at Planned Parenthood.”

Well, amen, Pastor Peters and I hope to have him on the radio very soon to tell his story and encourage the Church to follow in his footsteps just as he is following the Lord Jesus!