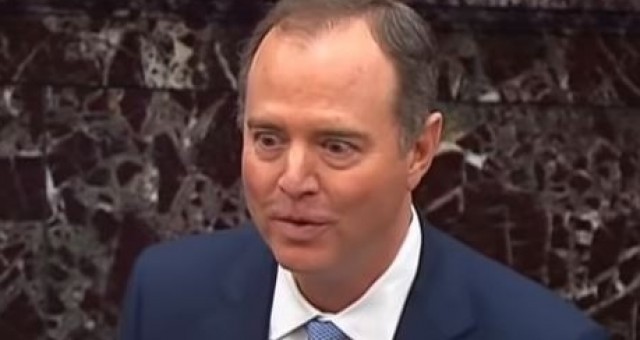 Opinion| Mark Sidney| I think we were all waiting for this moment, weren’t we?

Sooner or later Adam Schiff’s completely fabricated and wholly unethical ‘rendition’ of President Trump’s phone call with Ukrainian head of state Zelensky, was going to come up. Now that it did, just as we expected it would, it crushed Adam Schiff’s moral.

Just in case you did not remember this:

Schiff later had to ‘explain himself.’

Today Senator John Barrasso, a Republican from Wyoming, said that he watched the blood drain from Adam’s face as President Trump’s counsel confronted the California Democrat about his fabricated call and transcript ‘parody’.

Senator Barrasso, who wears glasses and sits toward the center of the second row on the Republican side, claimed that he saw the blood drain from Rep. Schiff's face when confronted with his description of the Trump-Zelensky transcript.

How could Barrasso have seen this? Well according this the Senate seating chart, he is seated in the second row:

Mike Purpura played the video immediately after taking the podium on Saturday.

And there Schiff was lying his face off for the whole world to see.

On Saturday, Trump’s lawyers confronted the serial liar in person, making the blood drain from his face.’

Here, you can watch Barrasso describe Schiff’s face for yourself:

The blood drained from Adam Schiff’s face as they played that video. pic.twitter.com/IYHtgJroqg

They know they are toast.