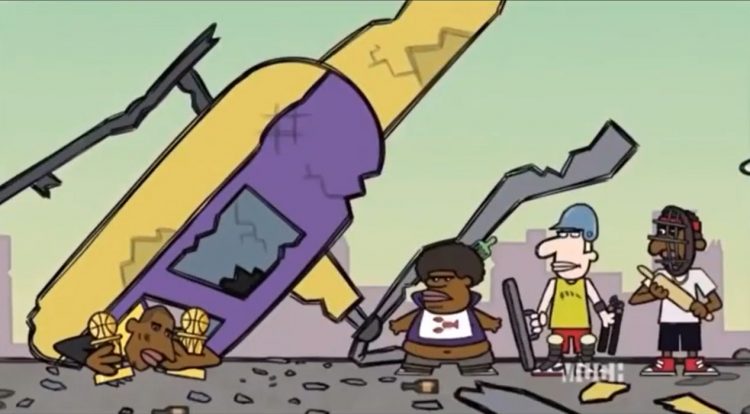 Seriously, you can’t make this stuff up.  Who would be fortunate enough to depict a famous basketball player’s death in virtually the very way it would occur a little over three years later?  Why, Comedy Central, of course, and now, they have removed an episode of Legends of Chamberlain Heights that had just that scenario in it.

Originally airing on November 16, 2016, the episode of Legends of Chamberlain Heights titled “End of Days” joked about Kobe Bryant dying in a helicopter crash and on January 26, 2020 it actually happened.

Here’s the relevant portion of the pretty terrible cartoon.

Of course, it was said to have been pulled out of respect for Bryant’s wife and children, but if they really had respect for them, would they have even put this in the cartoon?

Out of respect for Kobe and his family we have removed the clip of him and ask that you please don’t share it.

The synopsis for this episode is:

“A leaked sex tape causes a global internet blackout, and the Legends must find a way to survive the apocalypse. Meanwhile, Milk cashes in on his pirated Chinese satellite connection, which gives him access to the only internet left.”

The link to the episode on Comedy Central’s website no longer works. Additionally, what appeared to be a video of the clip on their Facebook page has also been deleted. The decision to remove to the clip was out of respect for the Bryant family, according to a tweet from the official Twitter account of Legends of Chamberlain Heights.

Legends of Chamberlain Heights first debuted on Comedy Central on September 14, 2016. According to the network, the series is about “best friends Grover, Milk and Jamal” who are are “lowly benchwarmers on the Michael Clarke Duncan High basketball team” with “superstar dreams.” The show ran for 20 episodes and concluded on August 20, 2017.

The thoughts and prayers of the entire BroBible team out go out to the friends, family, and loved ones of the Bryant family during this extremely difficult time. May Kobe, Gianna, and all of the victims of the crash rest in peace.