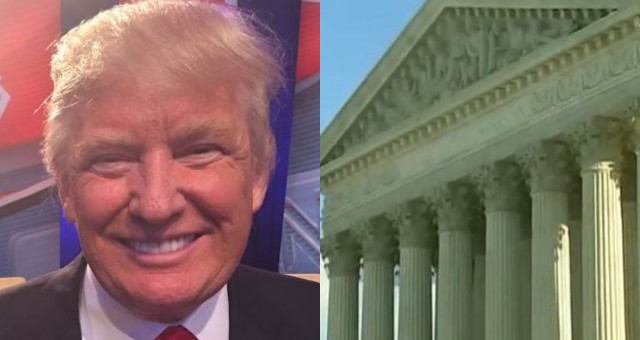 The Supreme Court Monday allowed the Trump administration to enforce a new rule that will deny green cards to foreign nationals who use taxpayer-funded social services, lifting lower court injunctions that blocked the change, Kevin Daley at The Daily Caller News Foundation reports.

The Monday order followed a 5-4 split vote that divided the court’s conservatives and liberals, according to Fox News.

At issue is the administration’s rule issued in August that would restrict immigrants entering the United States if the government believes they will rely on public assistance, such as housing or health care benefits. Lower federal courts had blocked the policy from being implemented while the issue is being litigated.

While a “public charge” inadmissibility standard has long been part of U.S. immigration law, it had not been formally defined by statute. The rule, announced by U.S. Citizenship and Immigration Services in August, defines a “public charge” as an immigrant who received one or more designated benefits for more than 12 months within a 36-month period.

“The principle driving it is an old American value, and that’s self-sufficiency,” USCIS Acting Director Ken Cuccinelli told Fox News in an interview last year. “It’s a core principle — the American Dream itself — and it’s one of the things that distinguishes us, and it’s central to the legal history in the U.S. back into the 1800s.”

Those benefits that would be designated included Supplemental Security Income (SSI), Temporary Assistance for Needy Families (TANF), as well as most forms of Medicaid and the Supplemental Nutrition Assistance Program (SNAP), commonly known as food stamps. The rule expands the number of benefits that can be considered from interim guidance issued in 1999.

The Trump administration promulgated a new rule in August 2019 that expands the definition to include those likely to use non-cash benefit programs like Medicaid, food stamps, or housing benefits for a period of months. The rule does not apply to humanitarian migrants like refugees or asylum-seekers.

In legal filings at the Supreme Court, the plaintiffs warned that lifting the injunctions would abruptly upend settled immigration policy going back decades. They also predicted that confusion would follow such a change because the government has not provided sufficient guidance for administering the new policy. For example, the rule requires immigration officers to negatively weigh an alien’s low English proficiency, but the plaintiffs say there are no guidelines for how language skills should be assessed.

The administration countered that the injunctions force them to issue green cards to applicants who are not eligible for permanent legal status under the new rule. If the government ultimately prevails in court and gets to enforce the rule, they won’t be able to rescind green cards issued during litigation.

“Respondents do not dispute that because of the nationwide preliminary injunctions, the government is presently awarding — on an effectively irrevocable basis — grants of lawful permanent resident status to aliens who, under the Rule, should instead be declared inadmissible,” the Justice Department said in a court document.