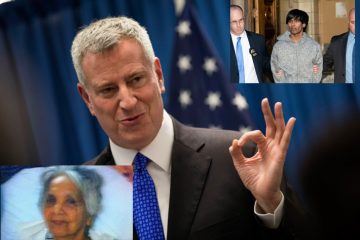 NYC Mayor DeBlasio is being sued for complicity in the rape and death of a 92-year-old woman.

The perp was 21-year-old Reeaz Khan, an illegal immigrant and violent criminal from Guyana. This was a vicious act perpetrated by an illegal who should have been behind bars or deported were it not for DeBlasio’s social experimentation and refusal to notify Ice before release.

A federal detainer had been placed on this garbage last November for assault and weapons charges. Yeah, you heard that right, the big anti-gun lib mayor releases a violent criminal out into the community with that kind of a record.

This creep literally broke this 92-year-old lady’s back during the assault and rape and left her on the street to die. Mrs. Fuertes’ crumpled body lay on the freezing sidewalk until she was discovered hours later (2:am). Unfortunately, she died in the hospital a short time later.

NYC: Muslim migrant who raped and murdered 92-year-old woman was in country illegally

What a horrible way to die for a helpless lady her age, and this monster was on the prowl because DeBlasio and others at city hall hate Trump and America more than they care for their own citizen’s well-being.

Worst Serial Killer EVER? — Billy Chemirmir, an Illegal Alien From Kenya, Now Being Investigated in 750 Deaths

It further states that Bill de Blasio aka Warren Wilhelm, (Individually), the Mayor of New York City, and the City of New York are complicit with Reeaz Khan in the attack, rape and murder of 92-year-old Maria Fuertes.

He is complicit alright! He may as well have been holding her down while his buddy did his thing.

De Blasio has been an exceptionally vocal supporter of immigration sanctuary status and has prohibited NYC police bureaus from actively working with Immigration and Customs Enforcement (ICE) agents when an illegal alien is jailed.

Little Chemirmir: Worst Serial Killers in U.S. History? BLACK Man Admits to 93 Murders, While a BLACK Illegal is Under Investigation for 750 More

When that attitude and mission is combined with the recent “bail reform” policies implemented, crime is truly rampant on the streets of the five boroughs, and illegals are more free to roam and break laws than ever before.

No wonder middle and upper-class NYC residents are looking for other places to live. I’m sure many trapped in the lower socio-economic tier would leave if they could, but like Mrs. Fuertes, they are having to just hope for the best.

The animals they release onto the streets across America won’t be victimizing the ruling class families; they live behind walls with security. You, on the other hand, are dispensable–a small sacrifice toward a greater social good.

For more info on this case check here.