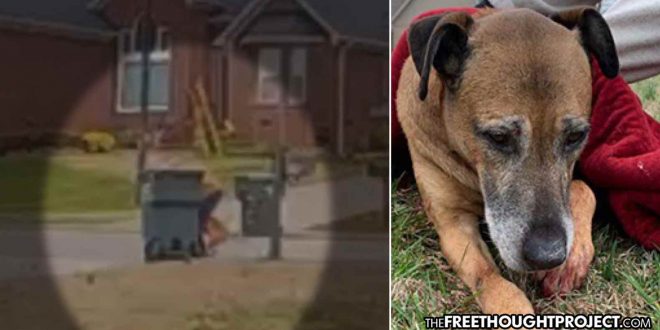 Mt. Juliet, TN — As our readers know, police officers killing dogs in the Land of the Free is such a common occurrence that it has its own name: puppycide. Despite postal workers, delivery drivers and pizza personnel coming into contact with dogs on a much more regular basis, it’s the police who are in the news because they can kill them with impunity. As the following story illustrates, an off duty police officer in Tennessee felt it necessary to try to kill a neighbor’s dog—by stabbing it six times.

The stabbing was caught on camera and is hard to watch. Mt. Juliet resident Tommy Jacobs told WKRN that their dog Cami got out of their yard on the morning of Jan. 17 in the Trailwood farms subdivision. Shortly after escaping, a couple walking their dog found her.

The couple found Cami in a pool of her own blood with stab wounds all over her body.

“When I got up there she had multiple contusions. It was bleeding a lot. She was in rough shape. I think if she had stayed there another 30 minutes she probably would have bled out,” Jacobs said.

The family had no idea what happened and they would’ve never known until a neighbor’s ring camera video was posted online showing a man repeatedly stabbing the dog. Jacobs told reporters that the video makes him tear up.

“If a dog was attacking mine I’d be kicking it and doing whatever I could do to get it away, but I couldn’t imagine pulling out a knife and stabbing that dog,” he explained.

After investigating, it was revealed that the man in the video doing the stabbing was a metro police officer. The unnamed officer claims Cami attacked his dog and he was forced to start stabbing her to stop her. However, Jacobs tells WKRN that’s not what happened and the video proves the officer had no reason to start stabbing Cami.

Since then, Jacobs was forced to pay for the veterinarian bills and the officer who carried out the stabbing has faced no consequences. Jacobs told WKRN that this looks like an abuse of power and questioned whether or not this officer should be patrolling the streets.

“It makes me wonder you know using excessive force on a dog what are you going to do in the line of duty on something like this with a human,” Jacobs questioned.

Jacobs is not alone in his worry either. Other neighbors who witnessed the officer stabbing the dog have similar concerns.

“It tells about the kind of mindset that this person has to just walk away after doing what he did, it’s horrible. If they are willing to do something like that to a dog imagine what they can do to others,” said Susan Ashmoree, the Neighborhood Watch commander.

Indeed. It takes a rather callous person to simply walk away from a suffering dog after stabbing it six times, leaving it to die in the street.

Ashmore explained to reporters that the video has the neighborhood worried.

“The way it had gotten attacked was horrific and it upset a lot of residents here,” she said, explaining that neighbors are concerned as to why the officer never even came back to check on the dog.

According to WKRN, “the Metro police officer did file a police report with the Wilson County Sheriff’s Office. The Sheriff’s office says that anyone has the right to defend themselves and that the owner of the dog would need to prosecute if they feel he uses excessive force. The officer said Cami bit his dog on the back of its neck and had to be taken to a veterinarian for treatment.”

The Jacobs are now considering filing a police report of their own to prosecute the officer since the video shows this stabbing was entirely unnecessary.

Warning, the video below is graphic. Viewer discretion is advised.

Though a police officer stabbing a dog seems shocking, TFTP has reported on a similar case before. As we reported in 2014, a former police officer was sentenced to 18 months in jail for the shooting and stabbing of his family’s dog. He actually slit the dog’s throat like an assassin.

Officer Robert Smotherman, claimed his dog had been acting aggressive towards his children and that he was forced to put the dog down. However, his version of the story was met by many witnesses and even his own son’s claim that he was acting in anger which led to him being found guilty.