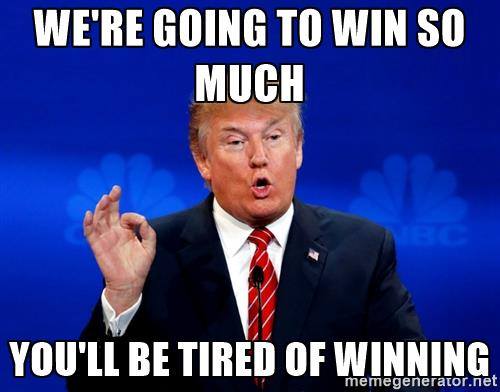 The phrase “Too much winning” is getting a little old, so let’s just call this something we haven’t seen in many of our lifetimes…

A President Who Does His Job

President Trump got off to a somewhat rocky and questionable start with Mexico and the immigration problem, but in the end they have become our ally and are now deporting people before they even get close to our Southern Border.

You probably won’t see this story much on the alphabet networks.

Mexican migration authorities say they have deported 2,300 Honduran refugees who crossed over from Guatemala with a caravan heading to the United States.

The “assisted return” of the Central Americans took place between January 18 and Monday, according to the interior ministry and the National Migration Institute.

A total of 1,064 Honduran refugees were deported on National Guard planes and charter aircraft, they said in a statement.

Another 1,239 were repatriated by land from the southern states of Chiapas and Tabasco, the institute said.

The Central Americans entered Mexico last week from Guatemala with the so-called “2020 Caravan” with the intention of heading to the United States.

Mexican authorities said the deportations were carried out “in compliance with the migration law and with full respect for human rights.”

Members of the National Guard last Thursday used tear gas as they arrested some 800 members of the caravan along the southern border with Guatemala, causing panic among the refugees who included women and children.

Thousands of Central Americans have crossed Mexico toward the United States in caravans in recent years, fleeing chronic poverty and brutal gang violence in El Salvador, Guatemala and Honduras.

Mexico faces pressure to keep the asylum seekers from crossing its northern border from US President Donald Trump, who last year threatened to impose steep tariffs if the country did not do more to stop a surge of undocumented Central Americans.

See how that works Democrats?

Imagine what will happen to your party if ONLY AMERICAN CITIZENS are allowed to vote.

That’s how it should be.

Honduras is a particularly dangerous place.

But evidently it is not as dangerous as Baltimore.

If current plans don’t work maybe we should start sending all who enter straight to Baltimore and let them see who deserves to be there.

Seriously, Democrats care nothing about people south of our border. They have simply found that American citizens won’t vote for them and they are importing future Democrats.

If we ever find a way to dispose of all the dead and illegal voters the Democrats will cease to exist.

The party is built on election rigging and illegal voting.

Thanks again Mexico and Thank You Mr. President for doing what needed to be done.

Those people need to focus on Making Honduras Great Again…