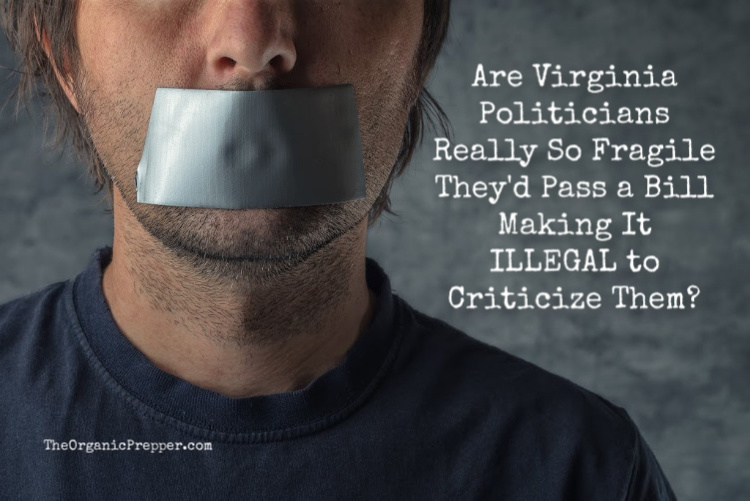 There’s a very good reason that Virginia wants to disarm civilians with a rash of new, unconstitutional laws. That’s because they seem to be modeling themselves after one of those countries where the government cannot be publicly criticized without great risk to the critic.

Yet another new bill is on the table and this one criminalizes criticism of certain government officials. The summary of HB1627, proposed by Delegate Jeffrey M. Bourne, reads:

Oh, muffin.  Are the people you’re oppressing been hurting your feelings? Then, by all means, while you’re actively trying to dismantle the Second Amendment, you should pass another unconstitutional law to attack the First Amendment.

It’s sort of like declaring a State of Emergency and calling gun owners white supremacists because you know you pushed them too hard and now you’re scared. But longer-lasting.

It’s also like communist China where critics can end up vanishing into a labor camp or watch their entire family be arrested. Or Thailand where lèse-majesté laws mean that a critic can be imprisoned for 3-15 years per count for any hurtful words about the king.

What constitutes a threat or harassment?

What exactly do the words “threats” and “harassment” mean in the terms of HB1627?

I’m glad you asked. If you take a look at some other codes that have been previously passed in Virginiastan, you’ll see that it can be something as simple as foul language.

If any person, with the intent to coerce, intimidate, or harass any person, shall use a computer or computer network to communicate obscene, vulgar, profane, lewd, lascivious, or indecent language, or make any suggestion or proposal of an obscene nature, or threaten any illegal or immoral act, he shall be guilty of a Class 1 misdemeanor.

A violation of this section may be prosecuted in the jurisdiction in which the communication was made or received or in the City of Richmond if the person subjected to the act is one of the following officials or employees of the Commonwealth: the Governor, Governor-elect, Lieutenant Governor, Lieutenant Governor-elect, Attorney General, or Attorney General-elect, a member or employee of the General Assembly, a justice of the Supreme Court of Virginia, or a judge of the Court of Appeals of Virginia.

Bourne’s Bill also changes the language of “he shall be guilty” to “he is guilty” of a Class 1 misdemeanor.

It’s insane that a bill defining harassment so vaguely is already on the books in Virginia – and it’s even more insane that someone is proposing expanding it so that politicians can legally intimidate their detractors with ease. (source)

Can you imagine the way this bill could be used to silence dissent? It’s so vague that it could be enforced completely arbitrarily.

If you say mean things on the internet, if you use swear words when talking about our elected officials, or if you happen to suggest some solutions like… I don’t know… is tarring and feathering considered illegal and immoral?…then you could be guilty under this proposed law. My comments section alone would fill an entire prison cellblock, not to mention the comments sections of other websites.

When a government plays stupid games like trying to disarm a bunch of gun-loving, rural-dwelling Virginians, that government is bound to get stupid prizes like those same Virginians marching on the capital and criticizing them on the internet.

People in public office open themselves up to criticism.

This is why we have a First Amendment. If anyone in the state should be allowed to be criticized, it’s the Governor, Governor-elect, Lieutenant Governor, Lieutenant Governor-elect, Attorney General, or Attorney General-elect, a member or employee of the General Assembly, a justice of the Supreme Court of Virginia, or a judge of the Court of Appeals of Virginia.

By the very nature of running for public office, one should expect to be the target of some verbal harassment. People who are so thin-skinned as to make a law about why nobody should be able to say mean things to or about them have no business whatsoever in government.

I wonder if this petition to recall Governor Northam counts as being abusive toward him? (Please take a moment to go sign it.) The bad news is, the Virginia state congress has been working on another bill meant to keep them in power by changing the rules for a recall.

Removal of public officers; petition requirements; signature requirements. Clarifies that the requirement that a petition for the removal of a public officer be signed under penalty of perjury applies only to the person or persons filing such petition with the circuit court. Registered voters signing the petition for purposes of reaching the required number of signatures shall not be required to sign under penalty of perjury. The bill also increases the required number of signatures to a number of registered voters in the locality equal to 25 percent, up from 10 percent, of the total number of votes cast at the last election for the office, and requires the signatures to be collected within a 60-day period. (source)

The hits just keep on coming in Virginia. Redistricting and a crapton of money from Michael Bloomberg during the election served to turn this state’s congress upside down. A legitimate protest has been meaningless to the government of Virginia. The members of the legislature don’t care what Virginians think and they’re arrogant enough to pass vaguely worded laws to silence their constituents.

This is the very definition of tyranny.

Don’t think it can’t happen in your state.

What’s happening in Virginia is a cautionary tale and political road map for what will soon happen in the rest of the country.

Could it be any more clear that every step of this was planned ahead of time?