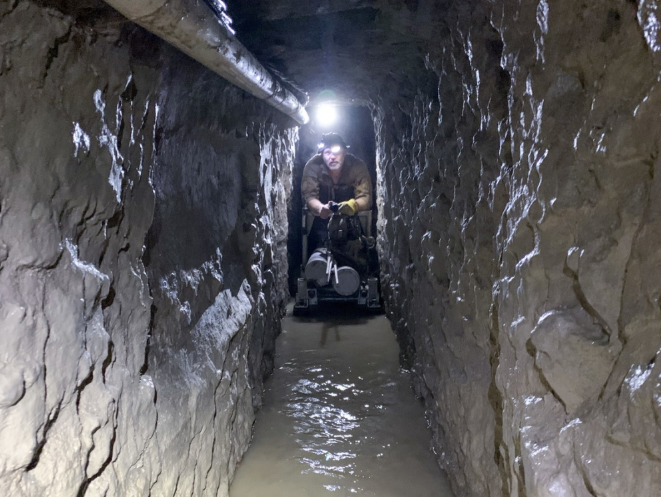 Customs and Border Protection has discovered a smuggling tunnel at the U.S.-Mexico border in San Diego. On Wednesday, Border Patrol and the DEA said the illegal tunnel was three-quarters of a mile long. The tunnel connected an industrial building in Tijuana, Mexico to a warehouse in Otay Mesa, San Diego.

Officials said it could be used for drug smuggling and human trafficking.

“I have no doubt that if drugs were smuggled in this tunnel, it was heroin laced with fentanyl,” said DEA official John Callery.

“While subterranean tunnels are not a new occurrence along the California-Mexico border, the sophistication and length of this particular tunnel demonstrates the time-consuming efforts transnational criminal organizations will undertake to facilitate cross-border smuggling,” said Cardell T. Morant, Acting Special Agent in Charge of Homeland Security Investigations (HSI) San Diego.

“This discovery underscores the importance of the partnerships HSI has with the U.S. Attorney’s Office (USAO), United States Border Patrol (USBP), Drug Enforcement Administration (DEA) and other regional agencies, as collaborative investigations and community outreach are key to combating this type of threat.”

Agents found air-ventilation, an extensive rail system and an elevator in the tunnel, as well as electrical and drainage systems.

“As far as the initial discovery, it was on the United States side, with a combination of a lot of intelligence gathering and technology that we were able to use,” stated Border Patrol Deputy Chief Aaron Heitke. “With the help of Mexico, we were able to exact a location of the tunnel itself.”

Officials believe the tunnel could have several exit points on the U.S. side, including in warehouses and open fields.

The tunnel is expected to be filled with concrete.

No arrests or seizures have been made in light of the discovery of this tunnel.

“As efforts to strengthen security on our Southern Border increase, Mexican drug cartels are forced underground to smuggle their deadly drugs into the United States,” said DEA Special Agent in Charge John W. Callery. “The sophistication of this tunnel demonstrates the determination and monetary resources of the cartels. And although the cartels will continue to use their resources to try and breach our border, the DEA and our partners on the Tunnel Task Force will continue to use our resources to ensure they fail, that our border is secure, and that tunnels like this are shut down to stem the flow of deadly drugs entering the United States.”

Deputy Chief Heitke added, “The investigation continues, and I am confident that our hard work and dedication to uphold the law will lead to future arrests and seizures.”