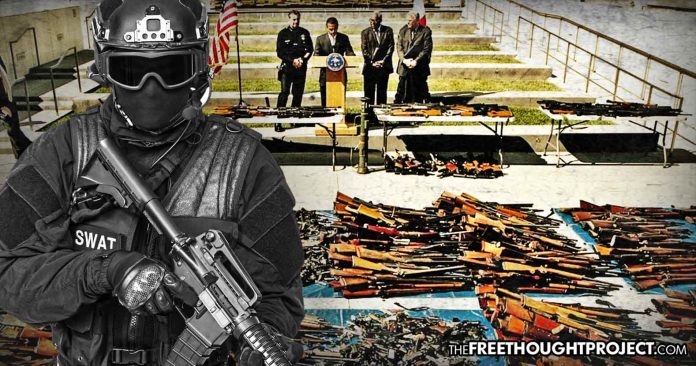 For the past two years, Democrats and Republicans alike have joined forces to pass sweeping regulations that could serve as a death blow to the Second Amendment. Red flag laws have been passed in a growing number of states and police are showing how willing they are to use them.

A new report out of New Jersey shows that since that state has passed red flag legislation, nearly 200 people have had their guns taken—that is more than one person every day losing their Second Amendment rights. According to NJ.com:

The Extreme Risk Protective Order Act, which went into effect Sept. 1, allows a law enforcement officer, family or household member to submit a petition to state Superior Court showing why a judge should issue an order to keep guns away from someone who potentially poses a danger of causing bodily injury to themselves or to others.

If the judge determines there is “good cause” to remove the guns, the judge will initially issue a temporary extreme risk protection order and a search warrant is executed to recover the guns, ammunition and firearms identification card from the person.

So far, 186 temporary extreme risk protective orders have been granted as of Jan. 22, according to the New Jersey Administrative Office of the Courts, meaning more than one person a day has had their guns taken away — at least temporarily — in New Jersey since the law went into effect. In 25 cases, a petition was made but the temporary order was denied by a judge, according to court data.

According to the law, the original seizure says a person has 10 days to plea their case in front of a judge to get back their firearms before the court takes them permanently. According to the courts, 88 final orders have been granted since the law went into effect.

Naturally, this has gun rights advocates up in arms. “Red flag is travesty for anyone who values Constitutional rights,” said Scott Bach, the executive director of the Association of New Jersey Rifle & Pistol Clubs. “It’s abuse of process. It is being used to harass gun owners.”

We agree. Unfortunately, the GOP remains largely silent in the face of these laws, and in most cases they are supporting them.

Despite his rhetoric claiming he protects the gun rights of Americans, president Donald Trump has become a cheerleader for these rights-violating red flag laws. In August, he proved just how dangerous such laws would be—and, in typical Trump fashion, he did it with just one tweet.

During a speech in April, Trump claimed that the “left is coming for your guns,” and he’s correct. But so is the right, and so is Trump.

What Trump’s speech to the NRA in April proved is the incredibly short memory of his support base. Have they all forgotten that Trump made one of the most damning attacks on the Second Amendment of any president yet?

In case you are one of those folks, in February of 2018, after the tragic shooting in Parkland, FL, President Donald Trump took to national television to betray his oath to the Constitution and his supporters and famously said, “take the guns first, go through due process second.”

Showing that he has no problem sticking to his flip flopping nature on gun rights, not only has Trump ramped up federal gun control enforcement, but he has unilaterally implemented federal gun control in the form of a bump stock ban. And now he’s doing the same with red flag laws.

But it’s not just bump stocks and due process that Trump wants. In 2018,the Washington Post published a piece alluding to the fact that Trump will likely go further than bump stocks.

“In private, he has indicated that he might do more, telling advisers and friends in recent days that he is determined to push for some sort of gun-control legislation, according to people familiar with the conversations,” the Post reported.

In just the first six months after the shooting in Parkland and the president’s statement on removing due process, the Giffords Law Center to Prevent Gun Violence recorded a whopping 55 new gun control measures in 26 states. That number is now far greater as states continue to pass “red flag” gun laws to literally do what Trump advocated for in Feb. 2018. They are taking the guns first and seeking due process second.

In fact, there are now 18 states who have implemented these laws and the federal government is pushing to do it on a national scale.

Here’s why that is a terrifying idea.

Before we get into the unconstitutional nature of such gun laws, let’s look at the incredible lack of logic applied by those who advocate disarming society.

“The same government that couldn’t protect the one inmate who was most at risk for being murdered or committing suicide—Jeffrey Epstein—wants you to believe that you don’t need guns because the state will protect you,” the Free Thought Project’s Johnny Liberty said. “Take a moment to think about that.”

Indeed, one does not need to go into the myriad of examples of citizens with guns saving countless lives to understand this premise. While these laws admittedly lack any logic, it’s also a terrible assault on your rights.

Citizens who are targeted by these laws will be deemed guilty first and only after their guns are taken, will they have a chance to defend themselves in court. This is de facto removal of due process.

As Reuters reports, under the legislation, a family member or law enforcement officer could petition a judge to seize firearms from a person they think is a threat to themselves or others. The judge could then hold a hearing without the targeted person being present and grant a temporary order for 14 days.

In spite of what officials and the media claim, when a person is stripped of their constitutional rights, albeit temporarily, without being given the chance to make their own case based on what can be entirely arbitrary accusations, this is the removal of due process. It doesn’t work, and it is rife for abuse as there is no way to stop an estranged spouse from calling police repeatedly and telling them their ex is threatening to cause harm to others.

Anyone, any time, now has the ability to claim someone else is a threat and have police take their guns. One does not need to delve into the multiple ‘what if’ scenarios to see what sort of ominous implications arise from such a practice. And because of Trump, we don’t need a “what if,” as he’s already done it.

In August, Trump took to Twitter to show just how rife for abuse these red flags laws are by calling for Chris Cuomo to be stripped of his Second Amendment rights using “Red Flag” laws.

“Would Chris Cuomo be given a Red Flag for his recent rant?” Trump wrote. “Filthy language and a total loss of control. He shouldn’t be allowed to have any weapon. He’s nuts!”

Would Chris Cuomo be given a Red Flag for his recent rant? Filthy language and a total loss of control. He shouldn’t be allowed to have any weapon. He’s nuts!

For filthy language and yelling, Trump thinks this man should have his guns taken. Though it is entirely unlikely that Cuomo even has guns of his own, and likely uses paid security, the idea of the president calling to disarm a political enemy should shock the conscience.

To be clear, no one here is condoning Cuomo’s actions or his horrid track record in the media. However, everything he did was legal and getting angry at someone for calling you a derogatory name is hardly a reason to take someone’s guns.

Therein lies the problem. Government officials cannot be trusted unwittingly with the tyrannical power to arbitrarily remove the due process of individuals on a whim. If not stopped in its tracks, this red flag movement will be the fatal crack in the dam that is the only thing holding back the government from disarming entirely peaceful and non-threatening individuals with whom they disagree.