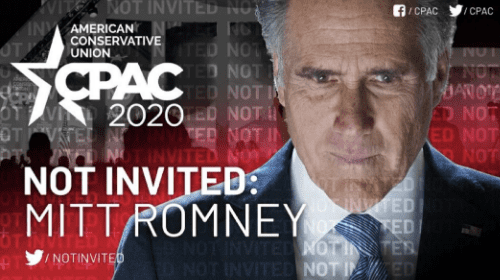 Romney has officially been disinvited from CPAC according to Matt Schlapp, Chairman of the American Conservative Union.

BREAKING: The "extreme conservative" and Junior Senator from the great state of Utah, @SenatorRomney is formally NOT invited to #CPAC2020. pic.twitter.com/f35tYy73V1

Newsthud was one of the first to break this story on Friday.

Moments ago, per Fox News Republicans in the Senate secured enough votes Friday evening to reject Democratic efforts to extend the Trump impeachment trial and call new witnesses, as the final vote on whether or not to remove President Trump from office could drag into next week.

After hours of debate during the day, the Senate voted 51 to 49 to block a Democratic motion to call new witnesses. The vote came after vehement demands from Democrats to call former national security adviser John Bolton to testify about the Trump-Ukraine saga.

However, there are still hard feelings from Conservatives against the 2 Republicans who opted to vote with Democrats.

On other fronts it seems that Utah legislators are scrambling to find the ejection button when it comes to Romney.

NOQ Report has this:

Mitt Romney is expected to vote for witnesses in the impeachment trial today. He does so against the will of the party and a majority of people in Utah, which he was sent to Washington DC to represent. He also does so against the best interests of the nation, as there are only left-wing arguments that can be made to justify extending a fruitless impeachment any longer.

A new bill being promoted by Utah Representative Steve Quinn, H.B. 217, would establish a mechanism through which voters in the state could recall a sitting United States Senator. He says the bill is not about Romney, but the timing of the Republican’s bill couldn’t be more conspicuous.

“If I had a dollar for everyone who asked me today [after the bill was made public] if this was about Sen. Romney, I would have $20,” said Quinn.

Despite his protestations, any support for the bill will come from those who are angry with Romney for his clear betrayal. He hates President Trump. Nobody disputes this other than those playing the political correctness game. He has opposed the President at every turn since long before he became a Senator, and he has continued to try to subvert Republican leadership on the impeachment issue.

It’s a longshot, as the threshold laid out in the bill is 25% of voters from the previous election. But given the state of affairs ahead of the 2020 election, if there was ever a time this could happen, it’s now. If the bill becomes law, a concerted effort to recall Romney and replace him with an actual Republican would be necessary.

It’s rare for Republicans to support the recall of a Republican, but Mitt Romney is a unique situation. He’s representing a state that President Trump won by 18-points, and it was only that close because Evan McMullin got 21%. Romney needs to go.

I’ve never understood how RINOs like Romney survive in their home states.

Utah seems to be nearing the end of its love affair with Romney and for good reason.

Though many establishment Republicans didn’t support Trump’s election in 2016, they are jumping on the bandwagon and this might be it for Romney.

Don’t let the door hit you in the assets Mittens.

Did I forget to say “Go Utah”?