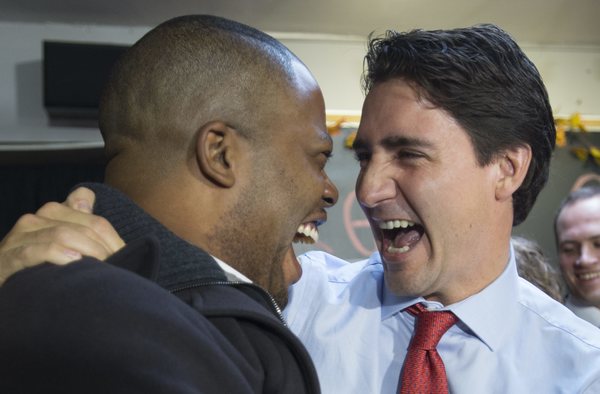 Not many people talk about the threat coming from the Northern Border, but it needs to be a national discussion and it needs to happen soon.

It is happening North of the border as well.

Unbeknownst to many Whites, Canada’s Prime Quisling Trudeau is now in high gear in his effort to make Canada’s majority White population into a minority as soon as possible.

Total Number of Foreign Nationals now entering Canada through both legal immigration programs and through illegal border crossing into Canada is around 1 million.

Here is a breakdown :

The ancestors of Canada’s majority population spent the last 150 years building Canada’s education infrastructure. If they could see that it was now being given away to aliens who are probably displacing Canadians for spaces in those education institutions and that a significant number of these aliens (Muslim Brotherhood members especially) bear malice towards Canada, they would roll over in their graves. For another example, note that many Chinese contemptuously refer to UBC as “the University of a Billion Chinese” to indicate their large ethnic presence there. Other ethnic groups think something similar of other Canadian universities and colleges. Many sources report that a significant number of international “students” are not even studying. Instead, they have taken jobs and look forward to taking even more advantage of university and politician treachery, stupidity and gullibility.

According to the Canadian Bureau for International Education. “As of December 31, 2018, there were 571,215 international students in Canada, a 16% increase over 2017.” These students are allowed to work in Canada and they compete with Canadians for jobs. They need housing, so they put more pressure on Canada’s already-stressed housing market. According to Canada’s former Immigration Minister, the total of these students in 2020 will be over 700,000. Are our politicians so busy with their boot-licking that they cannot see what is happening?

All of these near million non-Canadians have the potential to apply for legal Permanent Resident (Immigrant) status. The total of about 1 million immigrants per year is staggering.

Canada does not need these people. Continuing to allow them to enter will accelerate the destruction of Canada. This immigration idiocy has to stop.

There is no doubt that America is the target of many terrorists worldwide.

Why do we assume that so many of them enter through Mexico while ignoring easier options to the North?

Canada has been having it’s own terror problems & controversies in recent years.

I thought Trudeau was white.

I also thought he was a man, but I suppose I was wrong on both fronts.

A man protects his own family, he doesn’t betray them.

Somalis attack and he calls for an end to white supremacy?This guy could win the Democrat nomination in America with that kind of talk.America seriously needs to start looking at what is happening to the north, because that border may soon be a large controversy & problem as well.