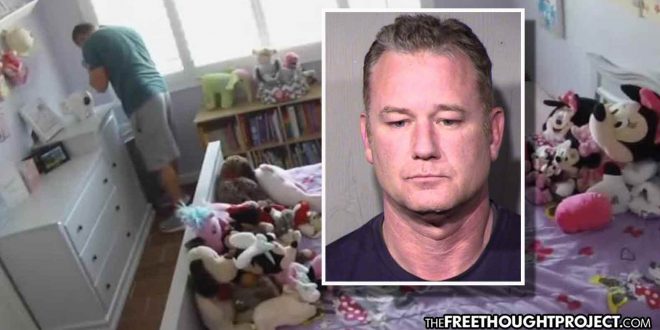 Phoenix, AZ — Imagine for a moment that you are a father and you get a motion alert from the nanny cam in your daughter’s room while you are at work. You grab your phone, open the app and find a strange man in your daughter’s room—sniffing her underwear. Well, that is what happened to a family in Phoenix and because the man smelling their daughter’s dirty underwear was a cop, he got off with no jail and unsupervised probation.

Now, this family is deathly afraid of this cop retaliating against them. Their worries are justified as he clearly faced zero accountability for his actions and as a result, he may think he can go after them too.

According to police, the incident happened last May when Deputy U.S. Marshal David Timothy Moon, 50, was touring a Phoenix home for sale. ABC 15 explained what happened next.

While his real estate agent was in another room, Moon went inside a 3-year-old girl’s bedroom, according to a police report. He focused on the laundry hamper in the corner. He dug through the dirty laundry and pulled out what appeared to be the girl’s underwear.

Video shows, Moon appeared to hold the underwear close to his face and appeared to smell them. Minutes later, he returned to the bedroom for a second round with the preschooler’s clothing. When he leaves the room for the second time, he appeared to notice the nanny cam. He quickly covered his mouth and said “goddamn it.”

Pointing out the disturbing nature of a grown man unable to control himself from grabbing a 3-year-old girl’s underwear and sniffing them, forensic psychologist John Delatorre, described what he saw as “compulsion,” according to ABC 15.

“This isn’t someone who’s unsure and needs to look around and tries to figure out — is this thing what arouses me?” Dr. Delatorre said. “He knows immediately.”

Adding to the disturbing nature of this cop’s actions is the fact that according to the police report, a girlfriend said Moon heard police were looking for him, so “he threw out his computer” and his Gmail account had a video of “girls doing gymnastics” in an email from “him to himself.”

Apparently this move had no bearing on the court who granted him blue privilege all the way through the till the end.

After the incident, Moon was arrested on two counts of felony trespassing with sexual motivation. However, due to his status as a cop, he later made a plea deal for misdemeanor trespassing and received a “sentence” of unsupervised probation.

But Judge Cooper denied those requests, even acknowledging that it is “unfair” and the court isn’t doing enough. She then cited the child predator cop’s “service” as reason to go easy on him. “The court believes that he is sincere in his remorse,” she said.

“It can seem unfair,” Judge Cooper said, acknowledging the victim family’s concerns. “It can seem like it’s not enough.”

Of course it was not enough. Now the family is concerned about what this child predator may do next.

“What if he comes back?” the dad said. “What if he tries to hurt us or our daughter? What if he loses his job and has nothing else to lose?”

After his arrest, Moon was fired. However, after his unsupervised probation ends, he could apply for the trespassing charge to be set aside and all instances of the record would be cleared and he can be a cop again—a chilling notion indeed.